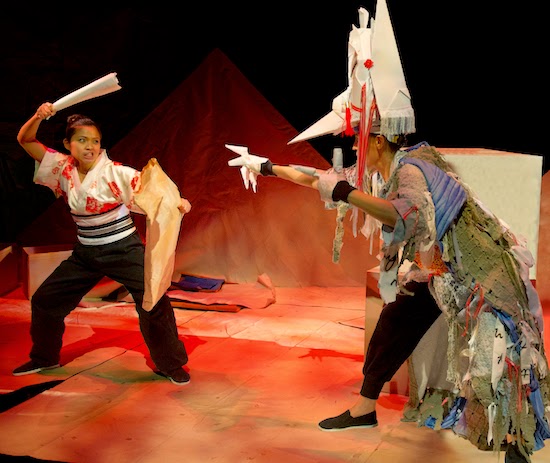 The latest show to grace the studio stage at Young People’s Theatre, Paper Song repeatedly asserts that “paper can be anything.” So true. But as a production, playwright Jared Matsunaga-Turnbull and director Caroline Howarth's uninventive choices fail to live up to the story’s potential.
Initially the play tells the story of a young sail-maker who helps a crane when she falls, injured, from the sky. After saving her, he meets a young woman who disappears into a room alone to create magical sails for his customer, but insists on being alone as she sings her song and weaves the fabric. Impatient, one day he breaks in and she transforms back into the crane he once rescued. Following the loss of his love, Tsuru, the sail-maker turns into a cruel troll called Tengu who longs to be reunited with the crane. Told using hand puppetry and shadows, this prologue seems compact, amusing enough and isolated from the remainder of the play. That separation makes the piece feel ever-so-slightly like it might become a compendium of Japanese legends, innovatively told using origami. In many respects, the show may have benefitted from that approach.


without one actor consistently narrating the play and given no authority the play feels a bit aimless
Instead, the play shifts to a young mouse who lives in an anthropomorphic village where little pieces of paper rain down before being turned into large sheets of paper used for folding. Utako-Chan (Zina Lee), the young heroine, has a name that means little song and that means that the audience is in store for lots of repetitive flat and tinny ditties. In fact, the words are even projected to Utako-Chan’s favourite song as if the audience is meant to join along – though the words vanish before the audience can get a sense of the melody. Playing a mischievous firefly and Utako-Chan’s grandfather, Sean Baek masterfully fights the gimmicky trappings of the show and demonstrates that there is something admirable onstage: his underutilized friendly and fierce presence.
In time, Tengu comes along to terrorize the village into making him a throne to block out the sun. Yet, without one actor consistently narrating the play and given no authority (often speaking from a weak position on stage or trying to compete with other action and underscoring at the same time) the play feels a bit aimless. For a show about how working together makes us stronger, the cast doesn’t feel all that bonded together with the various solos and they certainly never address the audience as a player in the drama – even after acknowledging with the house lights that the characters are not alone in battling the troll.
See, one of the letdowns of the show is the design. It boasts about the possible uses for paper, then doesn’t incorporate them into the design. Aside from an oversized mask for Tengu (which could be scary for some youngsters), none of the costumes include paper in their realization. The set does, with a rumpled backdrop and two chest-high mountains that will double as projection screens; however the props (aside from the origami made on stage) consist of wooden boxes with hidden compartments and pieces of fabric intended to replicate sheets of paper or larger scale folded characters. Why not consult with companies like Catalyst who crafted entire productions out of paper, for an authentic, relevant and topical approach to the design?
Now add to that a sound design that believes loud makes the music better and employs visible microphones for a tiny space to create an unnecessary but more resonant effect for the monster.
Conversely, the projections and animations that fill the stage are wondrous, ranging from a sky filled with fireflies to the gradual construction of the sky-destined throne. The scenes where the projections serve as backdrops (the waves of the sea, a fire sequence then the island where Utako-Chan finds herself after the ashes have cleared away) are evocative and effective; some of the loveliest work in the show is done by designer Kim Clegg.
Finally, the script interferes with a lot of the show’s success too. The pacing of the play locks into vignettes. Since no foreshadowing is used, the audience follows each moment of the story without any indication of where it might go next – only with the vaguest hint that the loose threads must be woven together at some point. The final half of the show all feels like denouement and needs to be more concise and more dramatic, as there was lots of restlessness amongst the crowd once Utako-Chan washed up on her island and the idea of rescuing her neighbours finally occurs to her.
There are lots of good ideas in the show: origami and storytelling, exploring the legends and passing them onwards to new generations, investigating the ideas of teamwork and challenging injustice. Unfortunately in this dry and leisurely production, none of the points hit home because half the audience is bored and waiting for the next projected effect or origami demonstration to carry their little imaginations away.
April 29 - May 11
Posted by THE CHARLEBOIS POST at 4:45 PM