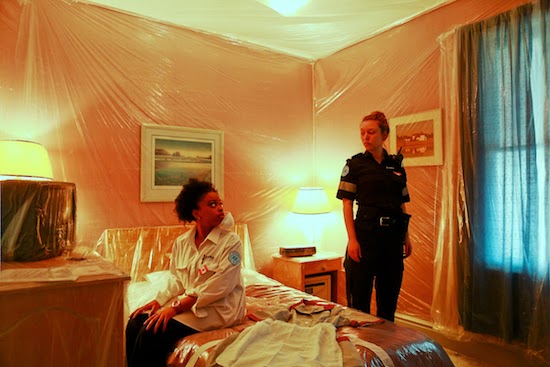 Now this, This is Vital Theatre
by Christopher Douglas

Outside the March has done it again. Site-specific, realistic and environmental, Vitals is a theatrical piece that has to be experienced to be understood. And it does need to be experienced by everyone.
Directed by Mitchell Cushman, Vitals takes place in a home in Toronto’s West End, where the audience tours the four floors of the home, sometimes led by a performer and sometimes left with clumps of other patrons to explore the detailed setting that has been created. The various rooms designed by Anahita Dehbonehie are occasionally literal crime scenes and often are wonderfully metaphorical representations. Be on the lookout for the little bonuses to search for throughout the spaces – open drawers, peek inside, read any papers, look at the maps – because the attention to detail in this production astounds, if the excessive costume choices can be forgiven.


The show focuses on a medic named Anna, played by Katherine Cullen, who regales the audience with stories from her professional life: what it is like to save someone, the worst cases she has seen, tales of her co-workers and so on. Cullen’s eyes tell the story. Her presence is very human and real but she has seen a lot, has been touched by it. She effortlessly carries the show from location to location, narrating the journey through the case debris, with assistance from a team of first responders. Even the responders are tasked with creating realism in this magical space, seen as one washes dishes at the kitchen sink, as if between shifts; exposing the banal duties but the scarred truth of the job too.
Emotionally disquieting, Vitals generally stays away from being gory or graphic but easily can unsettle the participants with the details of life – or really, the ending of it – that it presents that we, as humans, know about but try not to think of. Written by Rosamund Small, the sheer amount that the audience surmises from Anna’s clues can overwhelm, though the repetition of key points helps. However, while the scripted ending seems necessary, it feels altogether too tidy, as pieces neatly (yet unpredictably) fit together.
There is a fantastic sequence – almost filmic in execution – involving perspective, various narrative threads, projections, disembodied audio and The Man (Jesse Watts). Definitely a highlight of the show from any vantage point, and many are to be (unconsciously) had.
To facilitate the fact that not everyone in attendance can squeeze into one room together, the show has equipped patrons with a radio and headset. When Anna cannot be seen, she can be heard, usually live, speaking in the audience’s ears. Thankfully not overused, the sound by Samuel Sholdice remains clear and helpful in comprehending the multifaceted world of Vitals, even if it does force isolated patrons to experience the show as individuals rather than as a group.
Vitals can be hard to watch – it isn’t a show that you can passively sit back for nor is it easy to digest the content – however the challenge to your emotions and perspective on life has to be welcome in the arts. For days after the performance, the role of ambulances and medics in a big city has haunted me. And I know that’s the point.
April 29 - June 1
Posted by THE CHARLEBOIS POST at 6:01 PM