Review: (Stratford) Crazy For You 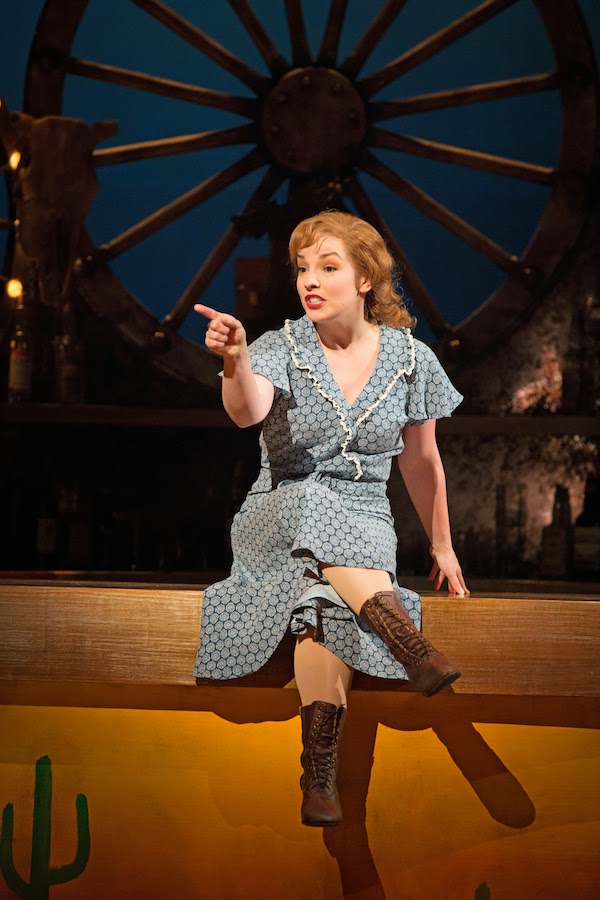 (photo by Cylla von Tiedemann)
Who Could Ask For Anything More?!
Stratford has a surefire crowd-pleaser on their hands
by Stuart Munro and Dave Ross
@StuartMunroTO
@dmjross

The week of Stratford openings continued last night with The Gershwins and Ken Ludwig’s Crazy For You. Often styled “the new Gershwin musical comedy,” Crazy For You is loosely based on the 1930 Gershwin show Girl Crazy. But rather than merely updating the original, Ludwig has crafted a new and clever story with multiple subplots and some of the funniest one-liners to be uttered on stage. This new Stratford Festival production hits all the right notes, giving the audience a thrilling evening, and more than enough reason to stand and cheer.


Stuart Munro: I’ve made no secret of the fact that I think the best musical theatre talent in the country is working at Stratford every season, and last night’s opening proved it once again. The energy from the company simply flew off the stage and carried the audience along with it, and the ensemble looked better than ever dancing director/choreographer Donne Feore’s energetic and athletic choreography. While this truly is an ensemble piece, there are definitely a few standouts. Marcus Nance, Stephen Patterson, and Steve Ross as the trio of singing cowboys really steal the show any time they’re crooning together, and Tom Rooney’s comedic talents have never been put to better use than in the act two opener he shares with leading man Josh Franklin. As Bobby Child, Franklin is warm and charming, sincere and loveable. He can sell a tap number with ease, or break your heart in numbers like “They Can’t Take That Away From Me.” His chemistry with Natalie Daradich’s Polly is utterly palpable. And even if their dancing wasn’t quite as strong as I might’ve liked, they both had more than enough personality to own the large festival stage.

Dave Ross: I have only the smallest of quibbles, and that is in the vocal quality of Natalie Daradich (Polly). There is a distracting tightness and constraint in her voice at times, which was particularly noticeable in “Embraceable You” and “But Not For Me.” But I cannot stress enough that this is minor, and the rest of her performance makes up for it consistently throughout the show. I was really taken with how much the company seemed to be enjoying themselves. This is a screwball comedy with plenty of one-liners and tap numbers, and smiles are a must from the cast. But there was a warmth and veracity in their expressions, particularly in Josh Franklin. Any time my eye fell on him, he looked as if he was having a blast. The entire company made everything seem effortless, even when the stage was packed with dancers. The company is large, and at times the stage seemed almost crowded, but it is a testament to the skill of the dancers and Feore’s choreography that it somehow still manages to work. As a result of the large company, there isn’t space for much else, and the design by Debra Hanson takes a bit of a backseat as a result. But the festival stage is a challenging space to work with, and even though Hanson’s design isn’t remarkable on its own, it is the perfect complement to the performance – and let’s be honest, we came here to see a singing, dancing, sparkly musical. It was screwy in all the right ways and I loved it.

SM: Despite being 22 years old, the comedy has held up incredibly well – a testament to Ludwig’s solid writing. But it takes an equally talented cast and director to turn wonderful writing into wonderful theatre. It should come as no surprise that Donna Feore is more than up to the challenge. The pacing of this production is almost always spot on – every joke lands perfectly, every dance number actually comes out of a commitment to the text and story, and Feore’s choreography is complex and more than varied enough to keep the night from becoming an endless string of tap numbers. “I Got Rhythm” is a wonderful show-stopper, but I got literal chills from head to toe during the finale of “Slap That Bass.” My only quibble would be the blackouts during extended scene changes. But the production never succumbs to the risk of the energy flagging because of this, and by the end of the evening my face ached from how hard I‘d been smiling.

DR: I have to agree with you – pacing, choreography, and overall feel are all winners in this show. This production is consistently excellent throughout, and will be a surefire crowd-pleaser for the festival. I know I’m already planning my return to see it again.