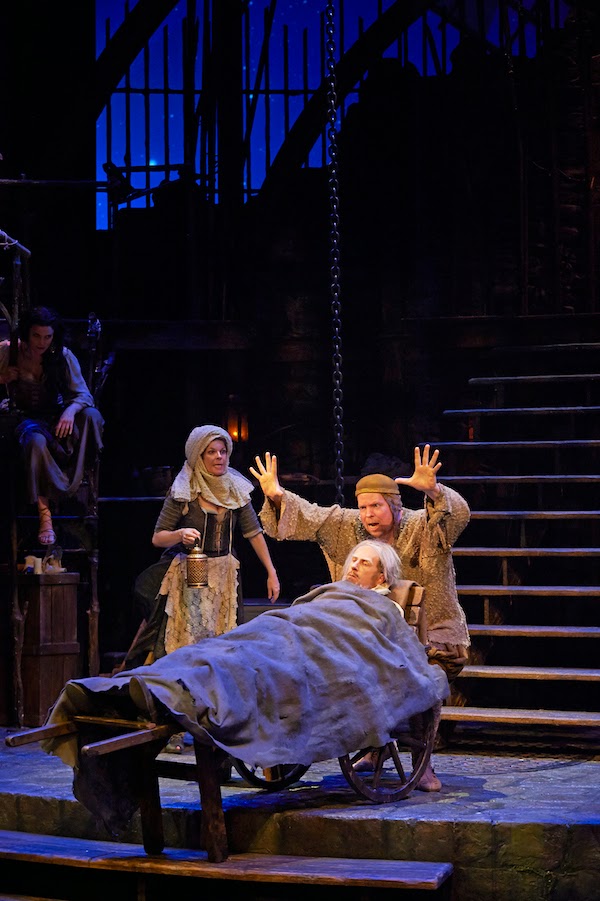 There was a definite shift about two-thirds of the way through act one of Stratford’s new production of Man of la Mancha, which opened last night at the Avon Theatre. Up to that point, I’d had a very hard time understanding exactly what sort of show I was watching. The script and score seemed to suggest a more introspective drama, but the direction and performances were pushing heavily on the light and comic. The two weren’t meshing very well, and I couldn’t help but feel something more poignant was being sacrificed the harder the company pushed for the jokes. But almost as soon as Matt Armet lovingly crooned out the first verse of “Little Bird, Little Bird,” the tone began to change, and by the time Don Quixote had been dubbed the “Knight of the Woeful Countenance,” the change was (happily) permanent.


To be honest, I’m not sure that a more serious approach from the get-go would’ve helped. The book by Dale Wasserman has lots of comic potential, and navigating a path between the light and the serious can’t be easy. But there are other issues. Mitch Leigh and Joe Darion’s score, while often beautiful, can begin to sound a tad repetitious by the time the fourth or fifth guitar introduction starts, and La Mancha boasts more ballads than I’m sure most directors know what to do with. And if Cervantes’ original novel had something deeper to say with the barber and the golden helmet, it’s completely lost in the musical version.

Man of la Mancha tells the story of Miguel de Cervantes who, while in prison awaiting a trial by the Spanish Inquisition, performs a play (with his fellow inmates) about Don Quixote, the eponymous man of la Mancha. The construct is maybe a tad clumsy, but allows for a large degree of inventiveness in staging, as the whole thing must be set within the dungeon’s walls.

Certain elements of this production do recommend itself. Douglas Paraschuk’s single dungeon set creates an appropriately brooding atmosphere and is spacious enough to provide the versatility required (though I question the decision to have the main floor on two levels, as this seems to hamper the staging somewhat), and Dana Osborne’s clever costumes allow all the inmates of the prison to convincingly portray the various characters required in this play-within-a-play. As the titular man of la Mancha, Tom Rooney has crafted an appropriately quixotic character – both idealistic and impractical, strong of mind and frail of body. While he lacks the vocal power one might hope for on the title tune, his charisma more than makes up for it during “The Impossible Dream,” and watching him transform from Cervantes to Don Quixote and finally to Alonso Quijana is remarkable. As the Padre, Sean Hauk is able to turn a secondary role into a star turn. He is warm and charming, and his smooth voice seems especially suited for “To Each His Dulcinea.” A scene was always stronger for having him in it. Less strong was Robin Hutton’s Aldonza, the object of Quixote’s misguided affections. Ms Hutton plays almost every scene at the same level (that is to say loud and intense) and her energy is always forced – I never quite believed her frustration and desperation, and her thin upper vocal range failed to give songs such as “Aldonza” the power they needed.

Under director Robert McQueen’s guidance, too much of this production feels forced, especially in the first part of the first act, and no one benefits from it. Ultimately, this story is about finding the true person within us, and realizing how little that has to do with the circumstances we find ourselves in. Where this production is quiet and introspective, it succeeds well. But when it is brash and over the top, that message gets lost.