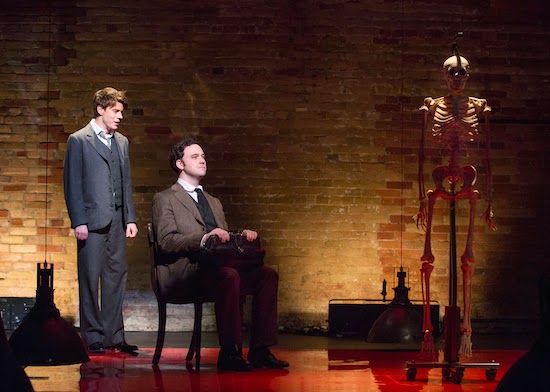 From Page to Stage (and Screen?)
by Greg Bunker

It is a curious thing that the classic British novel, Of Human Bondage, written by W. Somerset Maugham in 1915, has not been adapted to stage until now. Maugham was a playwright as well; his novel is considered one of the best ever written; and there are three film adaptations of it – the first of these launched Bette Davis’s career in the 1930s. Adapted by award-winning playwright Vern Thiessen, and brought to life by director Albert Shultz and an impeccable Soulpepper cast at the Young Centre for the Performing Arts, this world premiere offers up some big artistic risks that for the most part are exquisite and rewarding. The story, though, is a tad belaboured in the beginning, and come intermission, I was nervous about where it was all going.


Set in Victorian England, we follow the foibles of club-footed orphan Philip Carey as he returns to London from artistic pursuits on the continent. Now focused on the more practical vocation of medicine, Philip gets derailed by a waitress he, at first, mocks, then falls inexplicably in love with. His friends hate her. We hate her. But Philip continues to love her, and it becomes frustrating to endure, even as an onlooker. At intermission, I had written him off as a hopeless fool. But it is a scene we have all either experienced or have had a friend go through: the inexplicably twisted relationship. Philip is completely and irrationally obsessed with this contemptible Mildred. What’s missing is any understanding of why she is this way. I had to keep asking myself: how can Mildred be such a thoroughly awful person? I wanted to know.

The second half of the play saw far more interesting action with flashes of brilliance. Gregory Prest and Michelle Monteith as Philip and Mildred shine throughout, and Dan Chameroy nearly steals the show with his brief but hilarious take on how to dress mannequins in blue. The latter part of the play also served some reminders that we hadn’t invested much in the peripheral characters: Philip loses some of those closest to him, but the show steamrolls on, and we, and Philip, hardly seem to notice. There’s a certain inevitability about it, I suppose, but it makes the story feel rushed. And just when I thought the play might not come to a conclusion that would be satisfying, WHAM! A nice, tidy metaphor. The ending was especially beautiful and touching.

Lorenzo Savoini’s set and Mike Ross’s sound provide for some outstanding innovation that added another dimension of richness and dynamics on stage. The set is bold and stark, empty one moment and full the next with cast and props washing in and out of the bright red centre stage from the grey periphery. The set is also perpetually in a haze. Haze is always hypnotic with focused lighting, and it works well as an atmospheric effect in London’s streets, but it could be distracting whirling around during more still, dramatic scenes. It would have been more effective if it wasn’t there all the time. And the fantastic sound. In addition to props, the periphery of the stage is filled with instruments that the cast uses throughout the play to great effect. Pigeons cooing and gently flapping away; the beautiful tattoo of raindrops; reflections from the lake; shadow play; these are just a few examples of the exquisitely detailed effects performed by the cast when off scene (but still on stage). And their transitions, of which there are many, are quick, slick, and smooth. Unfortunately, I caught myself thinking more than once that some scenes appeared obligatory: short and not carrying much weight other than to plainly signify that something was going to happen in another plotline later on. This is no doubt a difficulty of adapting a 720-page novel to stage. It does make me keen to see the different film treatments.

Of Human Bondage explores the irrationality of the human condition, and the many ways of accepting it, whether it is reconciled or not. It is a reminder that though many things in life are inexplicable, it can make life all the richer for it. It takes a while for this theme to form - and some of the highs and lows are trumped by the relentless plot - but it is all nicely tied together by the end. And it helps to have the outstanding depth of acting and cast-created effects that carry us along the way.