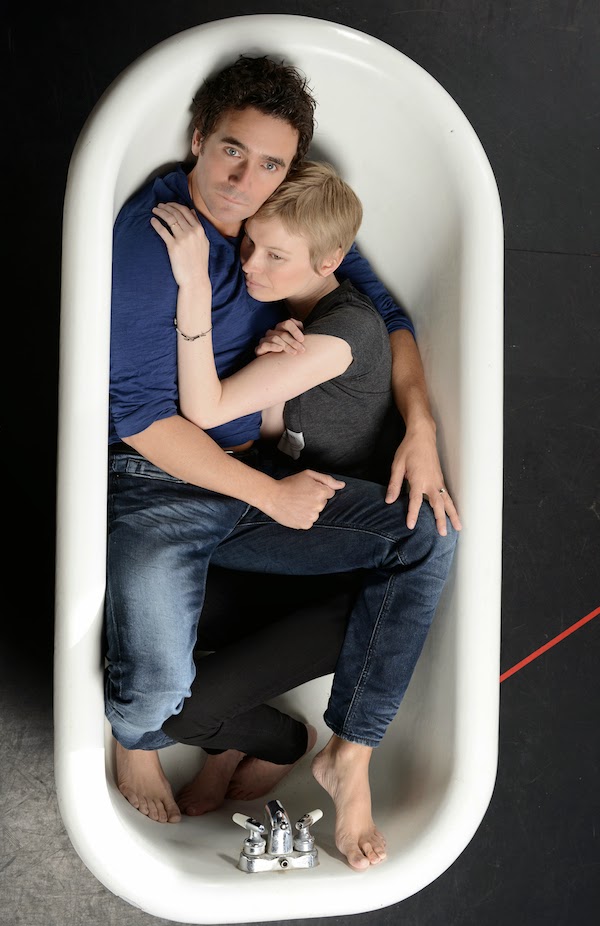 “City of lovers… city of lights? Is it both?” This quote from Belleville, a Company Theatre production in association with Canadian Stage, summarizes a feeling of confusion and uncertainty that runs throughout this play. Directed by Jason Byrne, with leads Allan Hawco and Christine Horne, this play contains a level of psychological darkness that was quite surprising but at times seems to struggle in its attempt to deliver a message.


Zack (Allan Hawco) and Abby (Christine Horne) are living in Paris, and the program notes would lead us to believe they have all the good things in life, including an affectionate marriage. Zack is a doctor doing important research for Doctors Without Borders, on preventing children from contracting AIDS. Abby is living in a city she always wanted to see. However, it is clear from the get-go that this is not the case. Their perceived happiness actually never exists on stage, and it unravels in calculated ways as the play progresses. Zack’s relationship/bromance with Alioune (Dalmar Abuzeid), their landlord, is completely false. Abby is decidedly not happy, and her character seems incomplete and unfulfilled. There is a panic in her character that never seems to be reconciled, and it is deeply troubling. There is a lie that is central to this tale, and indeed Abby is the only character who is blind to it. Even Amina (Marsha Regis), Alioune’s wife, knows there is a secret.

Amy Herzog’s script is a bit of an enigma. There are spots where intense realism reigns, and the minutiae of the day-to-day in a relationship is portrayed at the cost of momentum. However, the unravelling of Zack, Abby, and their relationship happens in an excellently calculated manner. Just as Abby is unsure if Paris is the City of Lights or Lovers, the script feels uncertain in where it is trying to go, or how it is going to get there. There are clear attempts at linked metaphor through the play, but they seem to have little substance beyond their mere presence. But this is cancelled out by the incredible psychological darkness that Herzog has woven into the script. While the script is difficult to access and feels incomplete in places, upon reflection and discussion with others, I’ve needed to remind myself that perhaps shorter plays, such as this one (90 minutes with no intermission), should be treated as a short story. Fiction writer Rebecca Rosenblum speaks of her love of writing short stories, for the opportunity “for a character or characters to walk across the spotlight—to have a brief, intense moment of illumination, and allow the reader to imagine what came before and what will come after.” A script can’t have all the answers – there must be chances for the audience to imagine what has come before, after, and indeed with this piece, within the story. While Herzog’s script seems difficult to access when a high-analytical lens is applied to it, it becomes brilliant in the provision of these spaces within the story for the audience to imagine or create what has happened.

Performances in this play are, as one would expect, very strong. Hawco, of Republic of Doyle fame, demonstrates a depth of character in Zack that is so good as to be disturbing. Horne’s Abby is a difficult character to access – I initially found her performance incomplete and empty – a perception that shifted towards the end of the production, for reasons that will be clear to anyone who sees this play. Abuzeid and Regis have small characters in Alioune and Amina, and are not afforded the same character development as the leads, but this does not affect their portrayals. They are 'outsiders' in this play, and this is clearly portrayed. Regis, in particular, deserves recognition for the nuanced anger her character must portray. The design of the production is simple – the monochromatic sets and costumes by Yannik Larivee serve as a counterpoint to the idea of the City of Lights (this is another concept, similar to the metaphors in the script, that doesn’t seem to 'go' anywhere). Lighting by Kevin Lamotte portrays the passage of time in creative ways, while the soundscape by Richard Feren perfectly recreates the hum of a Paris street.
As a warning, this play is intensely, intensely dark. There are not many productions I feel a need to cleanse my thoughts after seeing, but this was one of them. This play is one that requires careful consideration before forming an opinion. The lens with which you view it will determine how you think of it. I was initially underwhelmed by the story and script, but have recognized the detailed artistry that went into Herzog’s script after some consideration. I’m still not in love with this play, and am muddled by the psychological darkness and the excruciating final scenes.
Belleville… a beautiful city? Not in this script. A psychological thriller? I’m uncertain – but maybe you won’t be.
April 6 - May 4
Posted by THE CHARLEBOIS POST at 5:24 PM