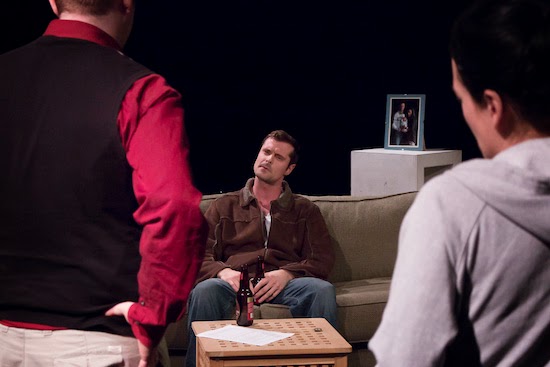 Living Room or Den?
When depression makes you feel walled in
by Tanya Naami
@TanyaNaami

Mary (Alarey Alsip) enters the room, wearing old clothing with her hood pulled over her head. Illuminated behind her is a family portrait; husband and wife with a baby. She smiles as she tells the audience a fairytale: there was once a woman, who had a garden. And in this garden, there was a bird whom she loved very much. One day, a cat entered the garden and the woman asked her husband to kill the cat, to save the bird she loved so much. The husband got his rifle and went to shoot the bird.

The metaphor of this tale drags itself into every corner of the play. Living Room. Dark. written by Leah Jane Esau and directed by Stuart Fink, centres around Mary; a depressive mother with an addiction to prescription drugs after an automobile accident leaves her walking with a cane. Her friend David (Jon Verrall) attempts to help Mary through this difficult period of her life, but fails to grasp the severity of the situation.

Having wanted to be a neurosurgeon, Mary's dreams were put on hold when she became pregnant with her son, Jake, by her husband, Howard (Yanik Ethier). The family is the talk of the neighbourhood, with fellow neighbours commenting on the poor behaviour of Jake to the rundown state of the house and even the number of times police have responded to domestic disputes. These neighbours, known as the Chorus, are performed by Melissa Paulson and Elizabeth Neale. Paulson also plays the part of Susanne, Mary's sister, who meets with journalist Janette (Neale) to discuss the details of her sister's story.

The performance was spectacular. The intimacy of Espace 4001 lends itself to the often awkward and tense situations that engulf families on the brink of failure. Ethier's performance as Howard, a drunk who is often abusive to Mary, is the most notable performance of the entire production. Although each actor was a real joy to watch, Ethier's convincing portrayal of a husband who just cannot understand the needs of his wife was very well done.

However, a major setback of the production was the setting itself. The stage is broken into three usable parts: the living room, the area where the neighbours gossip (represented by a clothing line) and two dinner chairs that face each other where Janette interrogates Susanne. The audience sits on raised podiums that surround three sides of the room. Although the room was small and well utilized, the layout of these sections often hindered the plot of the story as characters would have their backs to the audience, causing them to miss crucial facial reactions. It was also distracting to have cast members move through the set when their characters were not in the scene.

Living Room. Dark. tackles the ideas of depression, addiction and death in such a way that leaves the audience with feelings of anger, sadness and remorse as the events unfolded before them.