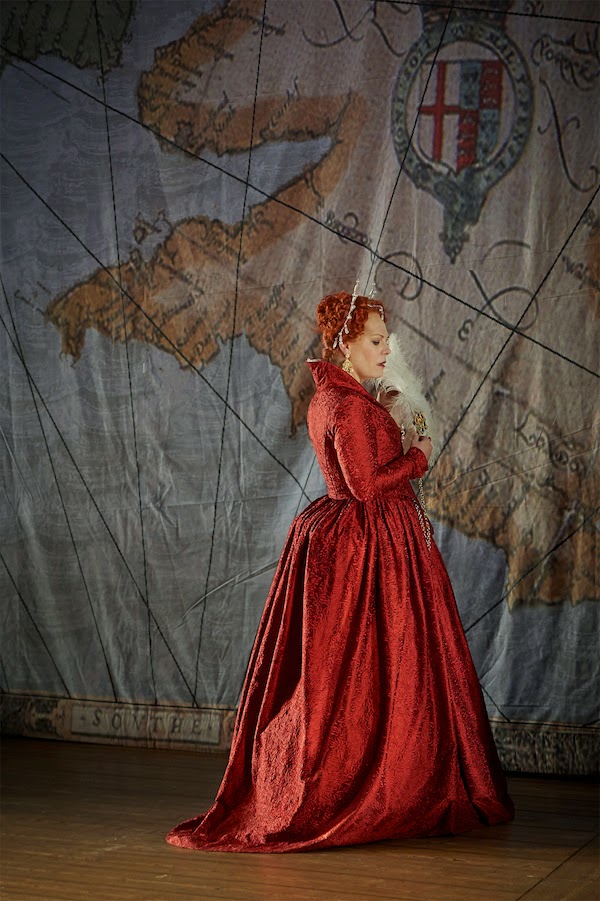 (photo by Michael Cooper)
Caught in a trap
by Shannon Christy

"Hell has no fury like a woman scorned” - Virgil may have had his own twisted purposes for writing of Dido’s rage against Aeneas in the Aeneid but the idea certainly resonates with the hapless Roberto Devereux, played sublimely by Leonardo Capalbo, who is sacrificed simply because he doesn’t love the right women. Never mind that the right woman is the Queen of England and that the woman he does love is married, the basic primus of not scorning a woman remains.

The story is set at the end of the Elizabethan age and involves Roberto Devereux, a cocky youth’s trial for treason by men who are simply jealous.  His guilt or innocence is never actually tried on stage: the central question is does Roberto love Queen Elizabeth I and the answer is a resounding no.

This is an interesting piece because it plays with the image of the Virgin Queen Elizabeth, performed magnificently by Sondra Radvanovsky, and the influence of both her parents in forming her.  For instance, on one side you have a woman who has her passions and truly cares and wants to be cared for which are traits historians used to describe her mother Anne Boleyn but on the other hand you have a woman who has successfully put a number of men she was rumoured to have had affairs with to death for treason, a trait she shared with her father who is infamous for radically getting rid of wives who failed to produce male heirs.


At heart this is a simple historical piece but what sets this production aside is the level of vocal talent and the acting performance of the main characters with special emphasis on Ms. Radvanovsky and Mr. Capalbo. By the end of the night I was not sure if Ms Radvanovsky was not Queen Elizabeth I.  Her ability to transform herself, to convey the agony of being the Virgin Queen, and to successfully convey her despair was enough to make this a terrific performance. However, the fact that she did this while taking her voice to incredible heights again and again with the beautiful tones that still pleasantly ring in my ears some two hours later is but a slight indication of the incredible physical performance she indulged us with.

Her counterpart, though not capable of the same range, has a tremendous, warm, powerful yet sensual voice, which resonates to your inner core. Your conscience does not sound like this but if it did it you would listen to what it had to say and enjoy the experience regardless of what was being said.

The set by Benoit Dugardyn and the costumes by Ingeborg Bernerth are rather expected for a period piece and at times opportunities or details seem to be missed. For instance, the stage is based on Shakespeare’s Globe Theatre. At first this seems like an interesting idea but it is barely exploited in the production and in instances such as the romantic duet between Sara, Duchess of Nottingham, sung wonderfully by Allyson McHardy, and Roberto Devereux, which takes place in Sara’s bedroom you have an enormous stage stuck in between them like some giant plough sowing the seeds of empty space.

In the same scene we have Sara, a woman reputed to be a prude, wearing a period satin gown with bare arms and neck more reminiscent of a prom dress. In this instance and keeping up with both her character and the other costumes it is not clear why she is not wearing a more conservative attire or perhaps a dishabille since we are in her bedroom. Clearly the aim is not to seduce Roberto who pays her an impromptu visit that night so the question remains.

However, those two minor details provide you with no excuse not to see this show. The cast members are remarkable in their performances, the emotions conveyed on stage are powerful and resonate in your conscience a long time after the curtain went down, making this a night to remember.  If you appreciate drama, remarkable acting and witnessing the human body being taken to its extreme then this is a show you should go out of your way to witness. However be quick because there are only six shows left before this show gets the axe.