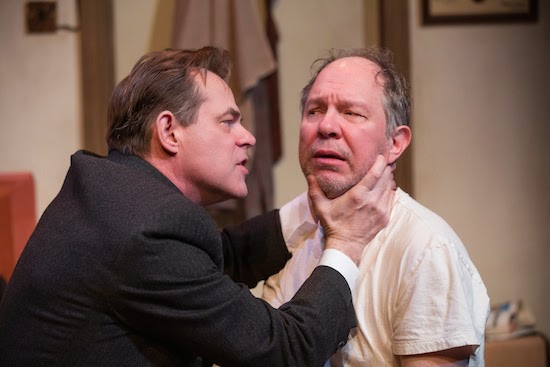 I arrived 15 minutes early to last night’s performance of Soulpepper’s The Gigli Concert and took a few of those minutes to admire the artistry of Ken MacKenzie’s set. With dirty windows, rustic walls, an unmade sofa bed, and absolute chaotic clutter everywhere, MacKenzie shows you exactly who lives here. The lights dim, music plays, and as the lights come back up, out stumbles JPW King (Diego Matamoros) in a morning-after stupor. King wrestles to pull a sweater over yesterday’s shirt and scrounges in an almost empty jam jar for some substance before washing it down with a swig of liquor. MacKenzie hit the nail on the head.

On the acting front, The Gigli Concert has a very talented cast consisting of Diego Matamoros as JPW King, Stuart Hughes as the Irish Man and Irene Poole as Mona. Admittedly, it took until the second act for me to realize just how talented this trio is, but I think that has more to do with the writing and my lack of interest in the story than anything else. The Gigli Concert is about a troubled Irish Man who seeks assistance from self-proclaimed dynamatologist, King (a doctor of an invented science), because the Irish Man desperately desires to sing like the famous Italian opera singer, Beniamino Gigli. Sorry, but not my cup of tea.


The first act consists of a back and forth between King and the unnamed Irish Man. Though Matamoros and Hughes have a great chemistry and hit their comedic marks, it lacks conflict and stays at the same level until intermission. However, in Act II, (thankfully) the actors have a chance to shine. Hughes has a moment of beautiful vulnerability followed by a brave uninhibited sob that catches you completely off guard. It also justifies his character’s emotional clamped-ness in the first act.

Matamoros has a great physicality as Dr. King and has incredible energy throughout the show. King, like the rest of us, has demons he’d rather not face. Matamoros hops back and forth between emotionally unavailable and bearing all to give great sympathy to an otherwise unsympathetic man. Poole’s Mona helps in bringing a breath of fresh air to King’s apartment with her vulgarity, as she calls it, and sharp wit. She also has the entire audience entranced in the sadness of her story at the end with Mona’s final monologue. Matamoros and Poole are convincing in their awkward relationship with one another though their movement feels rather choreographed.

Interestingly, as I was walking out of the theatre I caught snippets of other people’s commentary. As an audience, we all enjoyed the actors’ performances. As for the play itself? Honestly, it was mixed. Nevertheless, I’d still like a different cup of tea.