Review: (Toronto / Theatre) A God In Need Of Help 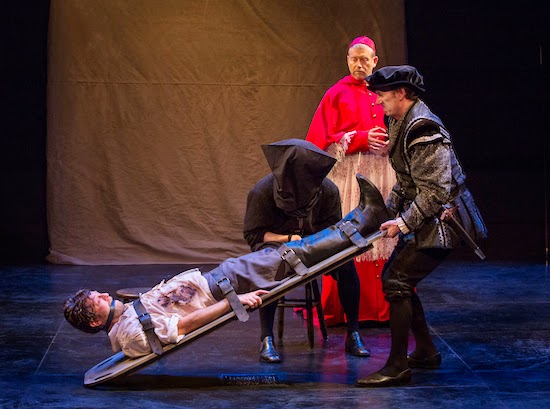 Four men dressed in black, bound, with sacks on their heads. A fifth man strapped to a board, whimpering in pain. Two representatives, one from the church and one from state. And one long expositional monologue.

These were the opening moments of Sean Dixon’s A God in Need of Help that, despite dynamic staging, made me think maybe God wasn’t the only one. But I am very happy to say that this feeling was fleeting. For as soon as the story got underway, I was won over by its charm thanks to the charismatic performances of the actors and the clever direction of Richard Rose.


The four strongest men and a Captain for hire had been charged with carrying a precious painting – The Brotherhood of the Rosary – from Venice to Prague. Interestingly, this part of the story is historically true. What happens next when the men are set upon by Protestant extremists while traversing the Alps and their mysterious escape however, is entirely fictional. And, coincidentally, the best part. Set in 1606, the play follows the four men and the Captain as they each tell their version of a miracle they may or may not have seen. Their audience consists of the Magistrate of Venice and the Archbishop of Milan who interject questions and clarifications along the way.

Dixon’s sharp dialogue and wonderfully strong characters make an ancient time feel incredibly modern. There’s no need to exert energy on deciphering the language of yesteryear, which in a play like this with multiple retellings and overlapping views, makes for a very thankful audience. Each of the five storytellers, ranging from a veteran soldier to an actor, has a unique opinion of what they believe to have happened. And Dixon justifies each rationale so that in the end you’re left wondering whom to believe and even more trying: with whom to agree. It’s a clever game of mystery, magic, and faith all woven together to challenge your beliefs and your reason.

Though the entire cast is overwhelmingly talented, I have to say it was Alden Adair’s endearingly simple Marco that initially won me over. Adair’s quick comedic timing and conviction is so sincere, you want so desperately to believe him! Watching Dmitry Chepovetsky on stage is like a master class in acting. Upon returning to Venice, the Captain is brutally tortured and can barely sit up by himself. Conversely, while on the road, he is at full physical strength. As the Captain relays his version of events to the Archbishop, Chepovetsky steps (literally) back and forth between broken shell and proud soldier, sometimes with just the twitch of his head.

Tony Nappo’s Dolfin is charismatically charming and definitely got the biggest laughs of the night. With a twinkle in his eye, Nappo nailed adding just enough impish cheek to his tale to leave you questioning everything you’ve already seen. Meanwhile Daniel Kash’s Cocco demands respect and completely grounds an otherwise fantastical story. It is Jonathan Seinen however who gives the most varied portrayals of his character Rafal. From confident miracle maker, magician, disillusioned child, to the ancient Greek god Dionysus, Rafal is the biggest and ultimately last question of the play. Seinen talentedly teases and tricks and in the end leaves you grasping at grey.

Though I detest using a common word like “fun”, it just happens to be the most fitting for Rose’s direction. Using the frame of the painting to mime different locations, as well as creating awesome tableaus, results in a fantastic visual performance. Kimberly Purtell’s lighting also aids in constructing many different settings in a relatively small space.

Despite the fact that I found the ending slightly anticlimactic, I have to say that overall I enjoyed piecing together the mystery and appreciate the fact that Dixon does not leave you with a black and white answer. Much like the painting that provides a stunning backdrop to the show, people are colourful and so are their stories. And it is up to us to interpret their meaning.

Email ThisBlogThis!Share to TwitterShare to FacebookShare to Pinterest
Labels: a god in need of help, keely Kwok, Tarragon, theatre, toronto