Interview Karen Mitten and Who (else) To Watch at SheDot 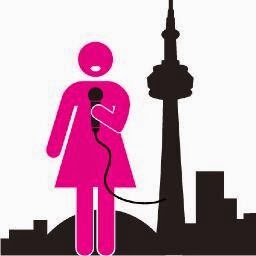 Karen Mitten speaks and Who (else) To Watch at SheDot
by Dena Jackson
Introducing Dena Jackson: Writer, Comedian, Cheese Lover, Weirdo
My friends have often asked me why I decided to get into stand-up comedy and the answer is simple. I love getting up in front of an audience and facing most people’s greatest fear. An odd thing about me is that situations that tend to freak me out (driving, taking exams, looking people in the eye) are situations that most people can handle and yet I struggle with them. The stage lets me deal with these struggles and other random thoughts in my head in a funny way. When I look at the performers in the SheDot Festival, my heart becomes very warm. I am comforted in the fact that there are tons of other women who feel the way I do about comedy. It is literally one of the greatest things I have ever tried and will continue to try until I’m old and in a remote control chair, poking people in the bum with my cane (and blaming it on others, naturally.) And even then I will probably still perform for anyone who will listen/look in my general direction. Comedy to me is like being a marionette on a balance beam. You are both the puppeteer and the marionette and the balance beam is your set. You can easily get thrown off while you are performing and it’s your job as a comic to adapt to the situation and get back on. Some of the best comics in the city, many of whom will be performing at SheDot, all make it seem so natural. In each set a comic prepares, they are perfecting their timing, engaging with the audience, considering the lighting, the room, previous acts and changing line-ups at the last minute if needed. It’s festivals like SheDot that continue to influence and encourage the female comedic voice as they perform. I’m proud to call myself an amateur comic in Toronto and it is a true honor to share the stage with some of these female comedy geniuses. I can’t wait to watch them shine this weekend. Dena’s Twitter

Karen is a favourite in the Toronto comedy community as a daytime schoolteacher who runs her very own comedy open mic at night. You will often see Karen around the city telling jokes about her experiences from being bitten by a geriatric dog to attending modelling school in New Brunswick, only to lose a beauty contest to the richest girl in town, how convenient. Karen’s positive approach to comedy can be defined as refreshing and hilarious.

As a light-hearted teacher from small town New Brunswick, you wouldn’t necessarily assume that Karen Mitten has a colossal stock of comedy in her back pocket. In the working class background where Karen’s from, studying “the arts” is a nice thought that someone might pause briefly for before getting back to work.

When I asked Karen how she got started in comedy, she told me that she studied stand-up at Humber College in 2005. But it wasn’t until a few months ago when talking to friends Dawn Whitwell and Lianne Mauladin (fellow comics and SheDot performers) that she was able to immerse herself into comedy. Whitwell teaches a well-known all-female stand-up comedy course called “Comedy Girl” that Karen attributes to helping her find her comedic voice.


Karen explained that her struggle with fully submerging herself into comedy was that dreaded voice in her head that we all know and often want to punch in the face. Regardless of the negative thoughts she was having internally, externally she was recognized by her fellow comics and was nominated for the “Fresh Meat Contest” in 2010. This Toronto-based competition was created by the Tim Simms Encouragement Fund for amateur comics who compete for the title of the “Cream of Comedy” at the Second City in Toronto.  It was the support from her peers and watching her comedic idols (such as Sara Hennessey, a fellow Shedotter with whom Karen was thrilled to share the stage with) that inspired Karen to make comedy an everyday commitment and start her very own comedy open mic.

Karen was offered an opportunity when fellow comedian and actress, Hannah Hogan (former host) at Not My Dog, decided to move to New York City. Not My Dog is a local bar about the size of an average person’s living room and Hogan had a friendly “Show-up/Go-up” style open mic that she ran for comedians every Thursday. Karen gladly took the opportunity to host and has since reformed the show by pre-booking both professional and amateur comics. Karen is very proud of this “room” (comedian terminology for “open mic”) and the vast variety of comics that have stopped by and tried their material there.

Karen explained that her greatest accomplishments with comedy are often found when she watches other comics go from having a shitty set one night to a fantastic one the next. Karen is known for her positivity and for encouraging her peers, which is why she has developed such a strong reputation in the Toronto comedy community. Karen noted that she continually works at creating a positive space for comics and explains that, “If I can be a driving force in someone doing well, I’m all for it!”

I asked Karen who she loves to watch in Toronto and list was long and loving. This list displays Karen’s affection for other outstanding talent in in this city; many of whom are also performing in the Shedot Festival.

Karen keeps a picture of Roseanne Barr at her bedside and looks forward to taking part in comedy as often as she can. She’s particularly looking forward to SheNot TDot, SheUnleashed and SheFresh as other shows to watch in the festival. For more information on Karen and her upcoming shows you can visit her website, Twitter and Facebook pages below.

There are many fantastic comics performing at the SheDot Festival this year. Here is a list of some (but not all) delightful and hilarious comedians to watch for this week:

Dawn Whitwell (She PG/ She LBT)
Dawn’s laid back, yet charming approach to comedy will make you nod in agreement while laughing out loud. Dawn gives great commentary on everyday peculiarities contributing to her likability and connection with her audience. A veteran in the industry, Dawn has performed at Boston's Women in Comedy Festival and Comedy Now! She also runs an all-female stand-up comedy course known to many Toronto “West-Enders” as Comedy Girl. Dawn is known for being a fantastic teacher and a strong supporter of new comics.

Lianne Mauladin (She Dot TDot/ She PG)
Lianne’s approach to comedy is both clever and refined. A teacher by trade, she often incorporates her day’s work into her comedy in both a relatable and lovable way. Something to watch for in Lianne’s comedy line-up is her ability to adapt to any surrounding she is placed in. Her versatility from stage to stage is outstanding, along with her comedic timing and natural charm.

Zabrina Chevannes (She Mom/SheDot TDot)
Zabrina’s boisterous energy and humour on stage are unmatched in this city. Her delivery of her experiences as a mom and registered nurse draw you in as an audience member to the point where you feel like you are sitting on her living room couch. This woman is so funny she’ll make you drool, almost as much as she did over a U of T dental student while he gave her some new braces.

Sara Hennessey (Host: SheDot TDot)
Winner of the Canadian Comedy Award (CCA) for Best Female Comic, Sara Hennessey is not to be missed! Her extremely relatable and quirky approach to comedy is consistently delivered with poise and awe. Sara has the ability to tap inside her audience’s thoughts and articulate them in such a way that will have you laughing uncontrollably. There is no better host for SheDot TDot 2014 than Sara.
Sara’s Twitter