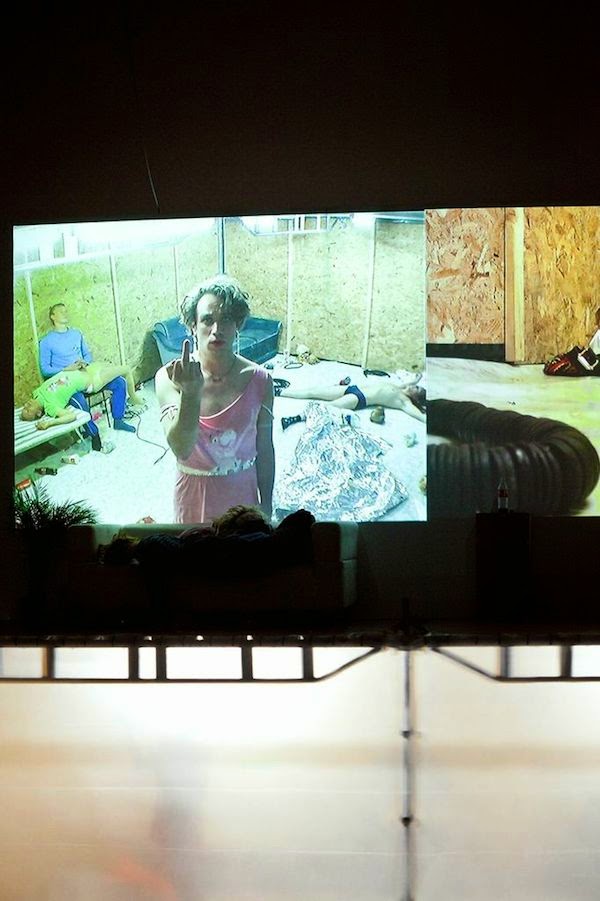 (photo by Robin Junicke)
Story of Hatred
Love yourself – stay away!
by Jason Booker

This is a three-hour, intermission-less film plopped onto a stage – not theatre. Allegedly the play is about Fritzl and his house, where he lives upstairs with a family of life-sized cloth dolls which he feeds by crumbling potato chips into their glossy magazine page faces. It’s a highly amusing, if perverse, opening scene that lasts less than ten minutes. However, that is almost the only live action in the piece (at least as much of the piece as I saw, but I’ll get to that), before Fritzl disappears behind the white drywall of his home through a hole in the cupboard. He descends into the darkness below his living room floor, a constructed box with plywood walls on three sides and a translucent plastic wall facing the audience. Inside this rec-room basement live three people. The program informs me that the man in drag is his daughter, who resembles a badly feminized Daniel Craig and mumbling into his hand-mic songs like Love Will Tear Us Apart – a darkly amusing but overly long English commentary on this German-based show. The daughter takes care of their two sons in this dark playroom, all of whom are played by men in their mid-thirties. Everything that occurs in the basement is filmed and displayed live by two cameras – one hand-held and one mounted in the upper corner near the audience, akin to a security camera – projected onto the drywall.
Why do I need to state that the program tells me? Because it isn’t at all clear from the show. Conte d’amour isn’t meant for audiences to understand or participate in – simply to watch in awe. And for them to walk out.


At my performance, the walkouts started about 45 minutes into the piece and continued throughout, commoners and theatre practioners alike. By 130 minutes, I joined them. I was sick of my time being wasted for no purpose and had been offended enough by the actions portrayed.
The title, Conte d’amour, means love story. Clearly it is a twisted title meant to criticize and question but the show only vaguely hints at emotions and family, instead questioning patriarchy and commercialism more. Watching the meticulous close-up of Fritzl preparing the McDonalds for dinner in the near-dark calls into question the ideals of what is communal, what is proper, what provides for our family – commercials that tell us what we need and want or actual subsistence. But when it drags on and on, barely visible and projected, the audience has no say in how the performance proceeds and where else to look – nothing can really be seen and nothing really happens, certainly not with a clear reasoning for why. It is a film that should be turned off long before Fritzl gets raped by his diaper-wearing son, then collapses into a corner, wearing a bathrobe, holding up a totem and singing Cyndi Lauper’s True Colors while kicking his feet in the air.
Then came watching Fritzl burst into the basement one night to inform his family that they are diseased Africans in need of his help is offensive but could be viewed as satire. When he strips down to his underwear and a dark mask to tap his asshole in front of the camera before sitting on the face of a cloth doll and sexually assaulting her, it isn’t funny – no matter how much the audience may titter. And having him speak in a language of clicks and gibberish that represents an African language can’t easily be seen as amusing; neither does having his baby son want to play Thai massage girl with daddy and slipping into a ching-chong patois with a matching stereotypical (and offensive) soundtrack.
Towards the end of the first half of the show, the prisoners all come to the corner and stare into the camera chanting about how God came to earth and humans killed his son, retribution will be had. They say it looking into the camera – directly to the audience – and we wonder how we, watching, are involved in what will transpire. An hour later, we are still expecting action as these characters passively await whatever fate is in store. Then, the man-as-a-woman steps towards the camera, staring boldly at us, shouting again and again: I am a victim (in German). Before she gives us the middle finger. I wanted to jump up onstage and rip away the plastic wall. Do something about your life, I wanted to scream to both her and the audience. It is unacceptable for people to be so passive about their time and existence and to call it drama or theatre. And it is unacceptable for theatre to simply be a projected image – why did it have to be live if there is no interaction with the audience, no interaction with humans visible for the people there, in the moment, to view? Yes, that lack of interaction is the point of the piece… but why inflict it upon an audience in such a banal and self-serving manner, a collection of idiotic performance art moments barely strung together?
What a piece of self-indulgent, offensive, meaningless bollocks. Too bad that World Stage felt the need to import this Eurotrash instead of commissioning a local artist to do anything – and I mean ANYTHING – onstage, which would have been more entertaining and worthy of the funds.
April 1  - 5
Posted by THE CHARLEBOIS POST at 7:16 PM