Will the actors in the Montreal premiere production of The Full Monty take it all off? (Photo by Tam Lan Truong, courtesy Beautiful City Theatre)

Much Ado About Dick

CharPo sits down with theatre director Calli Armstrong to preview the “full-frontal nudity” in the Montreal premiere production of the Tony-nominated Broadway musical The Full Monty. Audiences lap it up – but what about the actors onstage?

There is going to be full-frontal nudity in the Montreal premiere production of the Tony-nominated Broadway musical The Full Monty.

That may be a bit of a yawn for Montrealers who can see cock in Montreal strip joints seven nights a week, 52 weeks a year.

But it is still the first thing everybody asks before they go see this show, from Broadway to London’s West End: “Are they really going to take it all off?”


Which is quite formidable since the actors who will be peeling it all off onstage at Montreal’s venerable Centaur Theatre (beginning on January 30) are not professional strippers.

“The Full Monty fits in with our mandate at Beautiful City Theatre to celebrate diversity and new perspectives on human relationships,” director Calli Armstrong told me this week. “The Full Monty is really about the struggles in life, and the beauty of those struggles. It’s also a really fun show!”

And full of naked men, right? 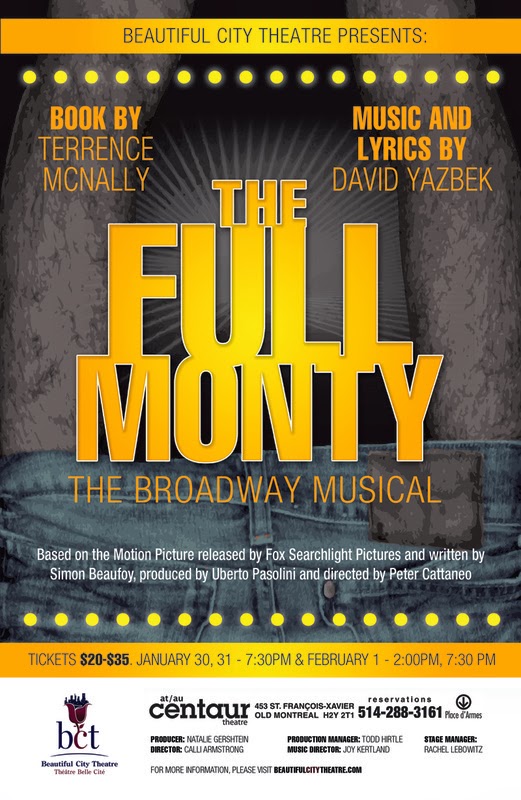 “There are many similarities between the British movie and the stage play [written by Terrence McNally], but there some strong differences: This version [set in Buffalo, New York] is a musical, which the movie is not,” Calli says. “You will see versions of the six men that were in the movie, and they have slightly different journeys. But the same themes are there, be it struggles with body image, family or poverty.”

Calli adds, “The play also comes with a score, so you won’t be hearing songs like Hotstuff and You Can Leave Your Hat On that you hear in the movie. But the song during the strip number – called Let it Go – is also sung by the men doing the strip number.”

But the actors will strip for the final sequence, right?

“We’d like to say, ‘Come see the show to find out’ but we don’t,” Calli replies, smiling. “Yes, there will be full nudity and the show is rated 18 and up.”

So how did Calli make her actors relax?

“The first thing I’ll say is that some people are very comfortable with nudity. But others are not, so it’s something we thought about clinically from the very beginning. Our company is one that values “safe space” and during auditions and call-backs those considered for roles were informed what the process would be like.”

This process reminded me of my very first Abominable Showman column for CharPo, also about male nudity onstage. I interviewed theatre legend Louis Negin, the first actor to ever appear nude on a legitimate British stage, in John Herbert’s Fortune and Men’s Eyes in London’s West End back in 1967.

“I think all actors are exhibitionist, to be honest,” Negin told me. “Everybody does the same number: ‘Oh, I have to think about it.’ But really they’re overjoyed! The thing that would kill you is if someone snickered or laughed [at your body]. Then I think I would just die a million deaths. But it doesn’t happen.”

Meanwhile, at the Centaur Theatre, Calli Armstrong says, “What we’ve done in our play, is made our [real-life] actors the choreographers, so that this musical about the creation of a dance strip number has really been created by the actors you will see on the stage. And the audience is also the audience in the play.”

In others words, this production of The Full Monty works on many levels because it is rooted in the real.

“It’s a lovely parallel process,” Calli says. “There’s a raw groundedness, and the only way that’s possible is if it comes from the actors.”

Which will make for a lot of audience hooting and hollering at the Centaur Theatre this week.

“It’s really a team effort,” Calli explains. “The actors were empowered to choose what their final number will look like and how long the lights are on. We made them as comfortable as possible, and I think it’s a thrill for them too.”