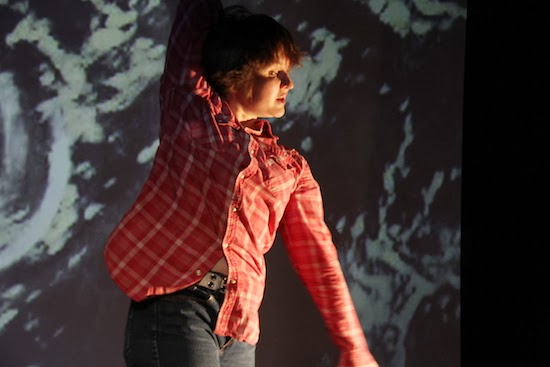 Cynthia Hopkins (photo by Jeff Sugg)
Somewhere between fire and ice.
A live documentary that warms up a cold winter night.
by Lisa McKeown
@lisammckeown

This multi media piece, written and performed by Cynthia Hopkins, was inspired by a voyage she was invited on by Cape Farewell, along with several other artists and scientists. Determined to throw off her usual themes of addiction and alcoholism, she sets out to make her first documentary about a pressing topic: global warming. This is not just any documentary, it's described as a live documentary, though the result is more a kind of multi-media live performance art. The show combines Hopkins's  footage with music written and performed by Hopkins, along with a live 15-member chorus and band.

But Hopkins doesn't escape her artistic past as easily as all that. Throughout the piece the parallels to alcoholism become increasingly evident, that somehow we've become addicted to substances that satisfy in the short-term, but are not sustainable. But how do we overcome certain immediate animal instincts, like the desire for pleasure and satiation, for those that are more significant in the long term?


There is no starting over, there is no 12 step program to recover from this kind of climate change. We're sunk.

The metaphor, she admits, is imperfect. After all, alcoholics almost always have to hit rock-bottom before they can start over. Not so in our case. If we wait to hit rock-bottom, if we wait to run out of resources or until we've destroyed enough for it to be a problem, it will already be too late. There is no starting over, there is no 12 step program to recover from this kind of climate change. We're sunk.

The footage that she took was only partially viable - the picture came out but not the audio, but she improvises her show around this, filling in the voices of the crew and other passengers she spent the three-week long journey with. The intimacy and affection she experienced with each of them comes through in her portrayal of each voice, from the gruff Dutch captain to the various other international artists and scientists on the journey. At one point they encountered a German physicist studying carbon dissemination, who came aboard and gave a small lecture that Hopkins didn't manage to get footage of, and so instead re-enacted comedically on stage.

Hopkins's  ingenuous humour is endearing and its spontaneity at times had me doubled over. The venue had to be changed at the last minute and the crew did a fantastic job of making that possible, as Artistic Director Franco Boni noted at the end of the performance. There were a couple of technical glitches, which resulted at one point in a crew member coming on stage to fix the screen, but Hopkins' s gracious demeanour made it seamless. "Thank you!" she exclaimed to him as he scurried off stage, to which the audience broke out in laughter.

I have to admit that going in, I was skeptical. Political consciousness-raising and theatre often seems to me like a combination that treads dangerously near the self-righteous. And admittedly there are a few awkward moments, in which the show starts to edge near the preachy, but as it progresses, we get into the story and the personal details of what drove her to create the piece. And I found that my ideas about this shifted as I began to think about the problem, which is frankly not just an epistemological one. In other words, it's not just about knowing the facts. We have the facts. The scientists are shouting the facts at us. So we need something more than knowledge; and this production is an attempt to provide us with something else.

Because it is a personal story of a kind - not in an individual sense, but it's a human story, a human worry about legacy, inheritance and integrity. I bristled a bit at some of the references to an idyllic past, the idea that the world was a utopia before the West conquered it, and the idea that it will return to one, because it seems to cloud the deeper point already present in her piece, which is that it's not just human nature to destroy, but also to create. It's comprised of both, and that's a reckoning we have yet to really face up to. And that cowardice might be our downfall; the hubris that brings the hero to cause their own destruction. But one thing that Hopkins is keen to point out is that what we have right now is not just a crisis but an opportunity.

Will we get off of this sauce?

This Clement World is part of the Carbon 14: Climate is Culture Performance Series curated and presented by The Theatre Centre in partnership with the Cape Farewell Foundation.

Running Time: 80 minutes
Posted by THE CHARLEBOIS POST at 6:11 PM