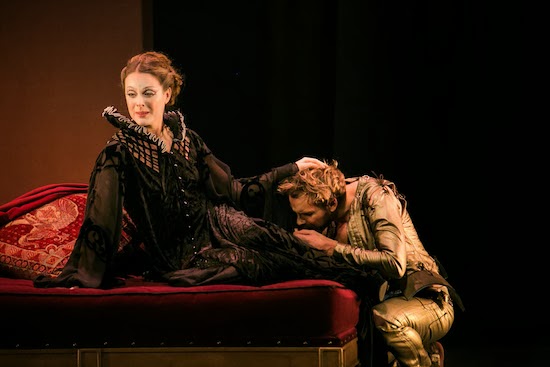 All About Le Breton
by Élaine Charlebois

Marie Tudor, a romantic drama authored by Victor Hugo and directed by Claude Poissant, tells the story of a woman experiencing a deep internal struggle. As queen of England, Marie must wrestle with both her responsibilities as ruler of a people and the struggles she faces in her personal life, namely the discovery that her lover Fabiano Fabiani has slept with another woman. Having discovered that the other woman is none other than Jane, the orphaned daughter of Lord Talbot and rightful heiress to the throne, Marie, with the help of Jane’s commoner fiancée Gilbert, devises a vengeful plan to punish Fabiani for his betrayal. Hardship and anguish ensue, leaving the all-powerful queen alone in her struggle for love and political respect.

The most engaging aspect of the piece was, without a doubt, Julie Le Breton’s performance as Marie Tudor. The actress gave so much energy to the character, resulting in a passionate delivery that so completely captivated the audience of Théâtre Denise-Pelletier. Throughout her performance, Le Breton succeeded in evoking the manipulative yet sensitive nature of the queen of England, adding depth and texture to her character. Though the other actors in the piece gave strong supporting performances, namely Jean-Philippe Perras who played Fabiani, they seemed to merely revolve around Le Breton who fully commanded the stage with her awesome stage presence and power. Having performed the role of the queen in past productions, it became clear that Le Breton knew Marie’s character very well. The actress seemed to embody the role so effortlessly, showcasing an acquired ease and confidence with the role of Marie. With the work of a fantastic team of actors with Le Breton at the helm, Marie Tudor kept the audience invigorated throughout the night.