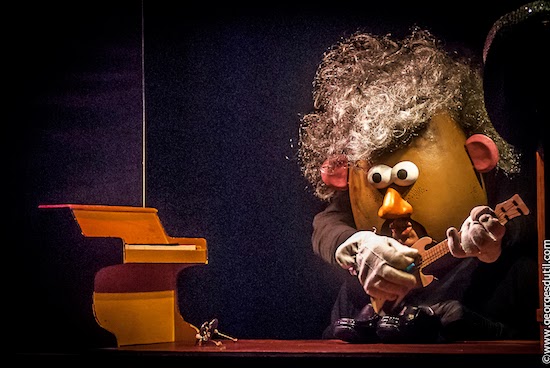 Belzébrute defines itself as a theatre band that enjoys creating great shows on a small budget. Through its creation, the band explores theatre objects, puppetry, masks, image poetry and shadow play with carefree and contagious enthusiasm. The band creates imaginative, bold and clever shows, jam-packed with references to pirates (Shavirez, Gypsy of the Sea) or Samurais (Manga) that know no limits. At the end of January 2014, Belzébrute Theatre Band will present Mr P, its latest creation, at Gesù Theatre in Montreal. Following its run at the 2013 Montreal FRINGE Festival, Belzébrute is putting on a revamped version of the show, a theatrical work filled with humour and delightful madness that tells the untold story of Mr. Potato Head's spectacular rise and fall. Amélie Poirier-Aubry, musical and communications director for Belzébrute, tells us a bit about the show and its creative process.

For more than 15 years, Jocelyn Sioui, founding member of Belzébrute Theatre Band, couldn't get rid of the vision in his head of Mr. Potato Head singing Mexico by Luis Mariano. The creator's fantasy spent a long time in the dark corners of his memory before finally appearing on stage in 2013. Well, sort of. In Mr P, you won't see Mr. Potato Head sing Mexico, but that's pretty well the only thing he doesn't do!

So we made a group decision to tell Mr. Potato Head's true story. Why? Why not?! We thought it would be a fun and crazy project to invent a life for an internationally known toy and give it a new dimension. The possibilities were endless!

In line with one of the fundamental mandates for our creations—to draw inspiration from popular culture and universal traditions— Mr P had us jumping head-first into a relatively new world. For the first time in our humble existence, the puppet plays the starring role. Éric Desjardins and Jocelyn Sioui, both actors/puppeteers, work in the shadows, giving life to a character made of plastic and resin! And believe me when I tell you that this is a very charming puppet. In our previous shows, puppets shared the stage with actors (Shavirez, le Tsigane des mers) or became part of our bodies (Manga), but this time we took the risk of putting them front and centre. Prepping this show and putting it on calls for a major effort of precision, attentiveness and agility. Especially since Belzébrute shows are always jam packed with knick-knacks, Éric and Jocelyn have to be extremely organized to find things behind the curtains of the puppet theatre!

Since we also eliminated language barriers by creating a show with almost no words, music and video play an important role in Mr P.  Similar to what was done with silent film, I composed a musical score that I play live and that serves as a kind of narration, punctuating the action and highlighting emotion. This means I have to be very attentive and precise, always keeping an eye on the action going on in the puppet theatre.  The video is a bit like the titles of a silent movie; it adds a great deal to the story.

With our meticulous arrangement of music, movement and images, we've built a truly magical show, which, we hope, will enchant our audience!