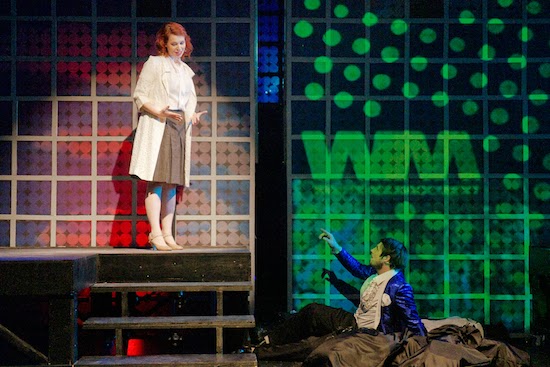 Just the thing, I thought, to take the edge off the first week back in the office after the holidays: a musical set in the Greatest Decade for the Use of Lasers in Pop Music! The Wedding Singer is a recent re-working of the 1998 film starring Adam Sandler and Drew Barrymore, here performed in the casual, cozy setting of Hart House Theatre.

I was there on opening night. It was clear that not everything had quite ‘gelled’ yet in the production, but I suspect that with another performance or two under its belt, the show will run more smoothly. The set, which makes heavy use of platforms on wheels, is a bit distracting: each scene change (and it’s a remake of a movie, so you can expect rather a lot) requires people and time to roll things around the stage, which gets tiring to watch after a while. For a show set in the 1980s (and believe me when I say references abound), the costumes didn’t quite fit: I hate to disappoint you, but you won’t see any 80s bridal gowns in this show. The main impediment to my enjoyment of the show was the mic system in the theatre. Voices were generally over-amplified for the space, so that the ensembles sounded shout-y; as well, there was far too much of cutting out and interference. With any luck, the crew will have the sound problems fixed.


Speaking of performance, the ensemble singing and dancing were at an impressive level throughout, even if I didn’t always quite understand the point of the choreography. The romantic leads Robbie and Julia, played by Isaac Bell and Ashley Gibson, had a sweet, appealing chemistry that had me sold by the dumpster scene (I’m such a romantic!).  The supporting characters were great, too, especially Romina Cortina as Julia’s brassy cousin Holly, giving my favourite performance of the show. Even the antagonists of the show, Linda and Glen (played by Sarah Horsman and Howard Davis), were likeable, and in Horsman’s case, could clearly dance up a storm.

As you might expect, the music references the 1980s, and there was a great 80s playlist in the theatre before the show and during the interval. There are signs at the entrance warning of smoke, mist, and synthesizer use. Be prepared; there is much synthesizer awesomeness. I was thrilled. I was also thrilled by the singing of the female cast in particular: none of them fell into that annoying habit of gasping on every note that I’ve been hearing in the big-budget downtown musicals of late, as though the female leads are constantly… in the throes of passion? Awkward. This cast just sings, and well, and it’s a joy to hear.

So there you have it: The Wedding Singer is a fun show, with good performances, and everyone’s just so likeable you’ll be rooting for them all. What with the post-holiday slump, and the weather either frigid, or drab, or both, Hart House Theatre’s latest production might be just what you need to see over the next couple of weeks.  I’m glad I went, and I’m sure it’s going to get even better over the run.