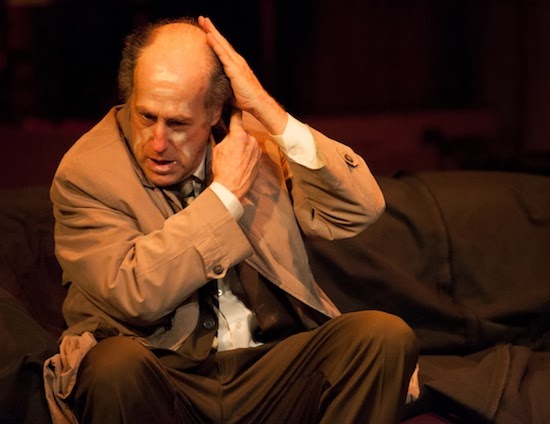 (photo by Matthew Fournier)
Feuerbach, who?
by Aleksandra Koplik
This is a play about the reality of theatre today. Written by Tankred Dorst, a playwright who has not once debated the death of theatre, it discusses the many facets of the stage and those who revolve around it. It felt like I was watching a remake of Waiting for Godot or Rhinoceros, I was waiting for something to happen, but it never did. Instead, it became all about Feuerbach. This very fast paced absurdist-inspired piece, directed by Téo Spychalski, introduces the audience to Feuerbach (played by Gabriel Arcand), a middle-aged actor that appears at an audition after seven years of exile from acting. There, he meets the director’s assistant (played by Alex Bisping) and attempts to educate him on the many roles that he has played and why a person working in theatre should know these works in the first place.


Feuerbach is an actor that loses himself in his characters. He’s played so many of them that they managed to strip away parts of his own personality. He’s become weak, fragile. With the digital age, he is even more lost. The stage shows signs of what used to be or could become a promising set (part of the design by Spychalski), now in ruins with a few chairs lying around, an old couch, and lights all over the place in between mountains of boxes. It mirrors his internal world. Though he was very funny, I wouldn’t say that he commanded the stage. I was much more intrigued by the assistant (Bisping), who is the centre of sanity in this play while they wait for the director to show up to the audition. Bisping does a marvellous job in his supporting role as a neurotic helper that isn’t quite sure why he’s working in the theatre. Everything from the acting to the lighting, to the audio visual effects (very nice touch), to the design, to the costumes was very well done, but you really have to like this genre to appreciate it.
If you’re into absurdism, go see this play. Did I mention there was a dog?
Jan 21 - Feb 8
Posted by THE CHARLEBOIS POST at 5:05 PM