Review: (Toronto) The Way Back to Thursday 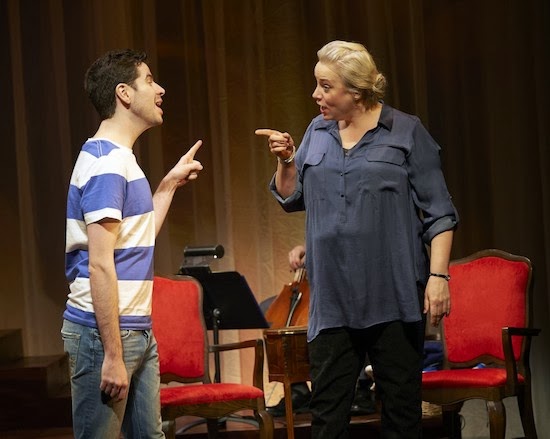 For some reason one of the most defining moments in a person’s life has to do with the end of a romantic relationship. But that’s a been there done that topic. So when Cameron’s first song starts off about his boyfriend leaving him I thought, “oh boy, here we go again…”

Well, we all know what assuming does…

Way Back to Thursday is a musical about a young man named Cameron (Rob Kempson)  and his relationship with his grandmother, played by the stunning Astrid Van Wieren. Their bond begins in the form of Thursday night movies, particularly ones with love and Rock Hudson. The story follows Cameron as he gets older and finds himself consumed by school, internships, work, boyfriends, and well, life. And naturally, a distance grows between Cameron and his grandmother.


The show is performed in traditional song cycle where each song is a stand alone piece. The actors (for the most part) do not interact with one another instead they only address the audience. While I’m not sure I am entirely sold on this particular style of musical, I definitely think it lent itself to the point and purpose of the show.

It’s a bit of a slow start with a touching song to introduce each character, but after the third song, which has some great spunk and humour, I was on board. Both Kempson and Wieren do a phenomenal job of portraying their characters at all ages. Especially Kempson as a young boy questioning his sexuality. It’s a significant moment in his life and he plays it with the perfect mixture of wonder, trepidation, and humour. And the vocals! While Kempson delivers the comedy, Wieren belts out notes to let you know she is no ordinary grandma. Her performance is a combination of the idealisms we all have about our elders with an honesty and self doubt that comes from hindsight and reflection.

While the lyrics are not going to strain your brain, they are real and poignant. Both Kempson and Wieren deliver the songs with such emotion and conviction that I was more than happy to go along for the ride. The music also does its part to enchant with Samuel Bisson on the cello and Scott Christian on the piano. Christian also orchestrated the show and is the musical director. And a big round of applause to Beth Kates for her gorgeous lighting design!

Way Back to Thursday is an emotional ride. It charms and disarms you with its truth and sincerity so much so that I left feeling like I had experienced everything in the show for myself.

And yes, I cried like a baby. … And I’m calling my nana tonight.

Email ThisBlogThis!Share to TwitterShare to FacebookShare to Pinterest
Labels: keely Kwok, passé muraille, the way back to thursday, theatre, toronto