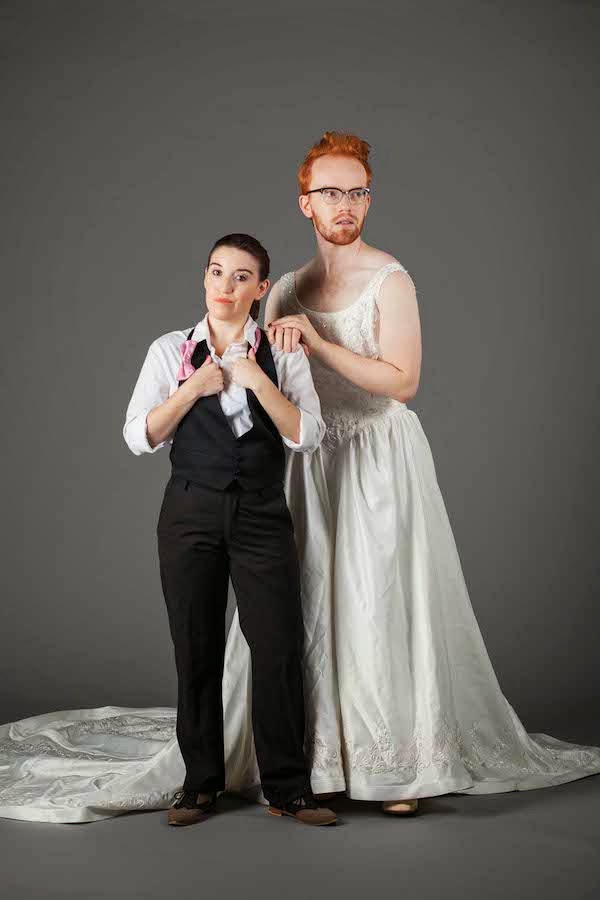 Tell Me Another Story!
Scheherazade spins quite a yarn
by Jason Booker
Set in an unspecific Middle Eastern locale and moved to a more contemporary but unstated time, this Scheherazade, teller of tales who stays alive for 1001 nights, maintains the basic storyline while delving into the human connections behind what the audience may know. This Scheherazade, played masterfully by the quick and clever Lindsey Clark, has a beautiful sister (Heather Marie Annis) after whom everyone lusts. In order to save her sister from a hasty one-night-stand marriage with the handsome but crazy Shahriyar (Steven McCarthy), Scheherazade continues to tell a story for nearly three years, from twilight until sunrise, always leaving her audience at a cliff-hanger so that they must keep her alive one more night to hear the ending.


Strangely, the way theatre works, telling a story onstage is often suicide for a playwright, since it involves so much backstory and so little action. Here, Johnnie Walker proves otherwise. He has streamlined the fables that Scheherazade narrates to their essentials and keeps the pace flowing. Director Morgan Norwich knows exactly the right amount of shtick to add to these fanciful, fictional moments to hold the audience’s attention. However, when the story tries to have action in the present, it tends to lose focus: people talk and stand instead of weaving a web of taut interest. When the story jumps from the beginning of Scheherazade’s reign to the end, there’s a baffling transition of nearly a minute where people walk across the stage and nothing really changes. Right about that time, the energy in the show deflated and this reviewer could not wait until someone (anyone!) met a funny and horrible end. There is only one moment of life in the last 20 minutes of the show and, once again, it involves a character, played by the suave Christopher Fowler, telling his backstory.

The design is simple but effective, using symbolic white for the sisters’ clothes and colourful scarves in inventive ways to differentiate the women of the chorus. There is some minimal (and unnecessary) use of projections and a large white bed that sees a lot of use.  Lighting is sometimes dim or shadowy, even when it isn’t a moody or evening scene, while it often just feels undistinguishably bright.

Special shout out: this cast is huge for a Fringe show with 11 people, nonetheless, with her vocal delivery and comic timing, Kat Letwin stands out. Thank you for letting her have those punchlines! That said, the work of this cast is overall very strong, it’s just the script that could use some tightening to get it back under an hour and to keep the laughs and the sexy stuff rolling along.


Scheherazade is at Next Stage
Posted by THE CHARLEBOIS POST at 5:52 PM