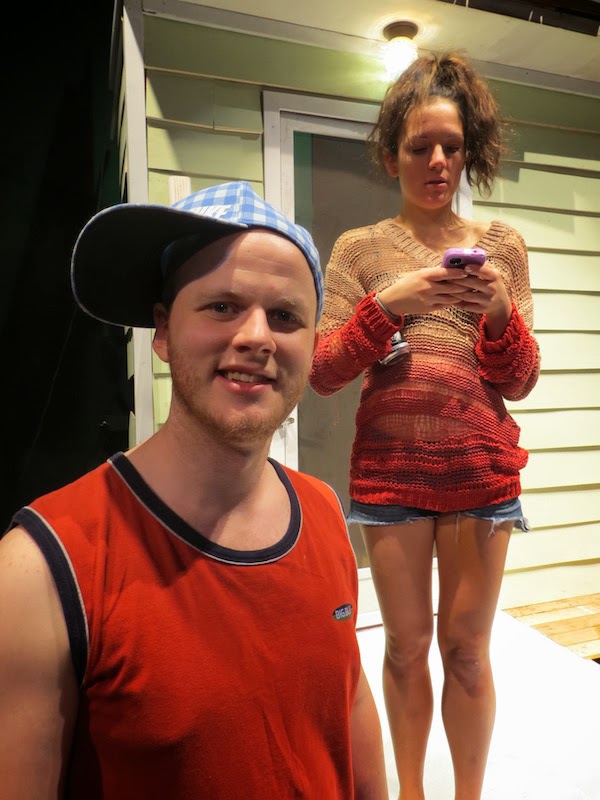 The play is called Detroit, but the themes of diminishing urban and suburban community and evaporating middle class are pretty universal. As technology shrinks the world and social networking expands our virtual lives, it is actual relationships and frank conversation that bring joy and release from pressure and financial distress.

Attila Clemman's set has two adjoining back yards that tell slightly different stories about their occupants. One home has the backyard barbecue, patio furniture and sliding glass doors. The other has the rickety screen door, unfinished deck and backyard debris. The laundry hanging from the clotheslines serve as a screen for projections of neighbourhood scenes and Madison Avenue images of perfect commercial backyard barbecue moments.


There is in fact less different than what appears on the surface of the two homes and the people. The appearance of stability masks the actual financial ledge that most of us are perched upon. This  becomes more apparent as the play develops.

It is the same for the characters in the play Terri Lorretto Valentik as Mary and David Whitely as husband Ben may initially appear to be  secure and stable, but just like the boom years on Wall Street and the home they live in it is primarily accomplished with smoke and mirrors. There are ever widening cracks in their lives' foundation and although their addictions and failings are the more socially acceptable ones, they are there just the same.

The neighbours; Sharon played by Stephanie Izsak and Kenny played by David Benedict Brown have clearly fallen further and are what neighbourhood gossips refer to as the wrong type of people. They are people that the audience falls in love with however and the actors throw themselves into the roles with abandon.

Director Chris Ralph has done a great job of creating a dysfunctional party on stage. Lisa D'Amour's script of overlapping dialect rings true and honest in the hands of Ralph and the talented cast. The play is full of fast paced action and is truly hilarious. The cast's chemistry is as good as it gets.

The ending of the play will cause a little head scratching among some patrons who are used to tidy resolution, but that isn't what this show is about. It's about taking the chance to talk to your neighbours even with their flaws. We are all just people one pay cheque or one circumstance away from disaster, so let's take a couple of chances and go through it together. Even without a sunshine and lollipop ending the audience came away from this night loving these characters, warts and all.


Detroit runs Jan 17 - Feb 1
Runtime: approximately 2 hours and 10 minutes with one intermission
Posted by THE CHARLEBOIS POST at 5:05 PM