Review: (Toronto) Flesh and Other Fragments of Love 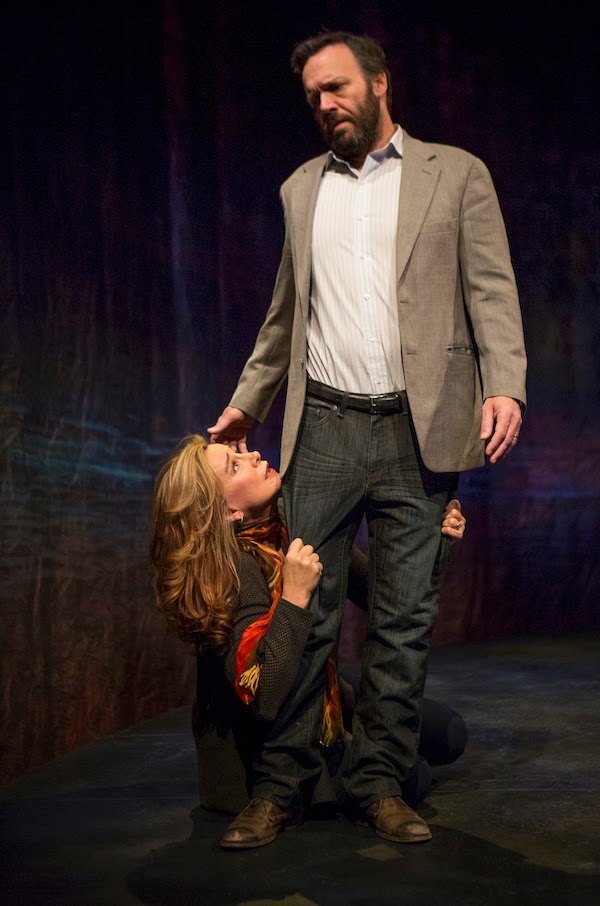 A trinity of desire. It’s a poetic and accurate way of describing our three characters, Simone, Pierre and Mary. Except the two never meet the real Mary, because Mary is dead.

Evelyne de la Chenelière's Flesh and other Fragments of Love is a unique take on looking at a marriage with deeply rooted and unspoken problems. Pierre (Blair Williams) and Simone (Maria del Mar) are vacationing in Ireland when they discover the body of a young woman (Nicole Underhay) on the shore. As they both make up Mary’s back story, feelings and long-standing issues with one another unearth. At first we see two people who nag and complain in a petty everyday kind of way. They are sitting across from each other in what can be imagined as a domestic space. But as they discuss the corpse of Mary, and as the story develops, so does their resentment, guilt, and anger.


It is like watching a battle of the sexes; as Pierre and Simone argue they do not always refer to one another personally but refer to the other sex, as if they are blaming the entire side for their problems. Simone wants a strong, grounded family life with a husband who is loyal and values spending quality time with the family. Pierre on the other hand, feels smothered, and wants to retain the kind of freedom he had before marrying Simone. Despite not being able to see eye-to-eye, they are undeniably in love.

The translation by Linda Gaboriau is truly fascinating. The poetry has to be some of the most beautiful and grotesque I have ever heard. Although the staging and the text are surreal, the couple’s problems are very real. No matter what your past relationships have been like, we have all seen and met people dealing with the emotions that Pierre and Simone carry. And, like real-life, many of these problems are mostly questions that are left unsolved.

At the centre of the stage is a small pebbly area where Mary’s body flops around. Underhay’s movement, choreographed by Denise Fujiwara is consistently eerie and reminiscent of Butoh. It is thrilling to watch, especially when combined with de la Chenelière and Gaboriau’s words delivered with an Irish slur. When either Pierre or Simone crosses the line into the ‘beach’ area we are suddenly in a surreal world. As the intensity grows the action moves in and around the pebbly beach. Richard Rose is precise in his blocking choices. When Simone lies down on the pebbles we know she has declined into something darker. I do not want to give too much away, but the events leading up to the end of the piece will make for great discussion.