Skype it! - Space, Friendship, and the Trojan War
by Estelle Rosen

Frank Cox-O'Connell  is an actor and director in theatre, and a rock drummer in music. Evan Webber is a writer and performance maker. Together they have authored, co-­created or facilitated over a dozen performance works in Canada, the USA and Europe. “We task ourselves with performing what we think is real in order to see it change. We don’t always agree. Our plays are often about this disagreement. We’ve been doing this for almost ten years now in a lot of different contexts and with many different collaborators. We always make things a bit differently, but there is one thing that is consistent, which is that this theatre (EW&FCO) is about how the sometimes opposed interests and positions of different people can coexist in the same place and the same moment in time.”

CHARPO: Little Iliad audiences will experience this play in an unusual fashion; specifically why does the audience watch the show wearing headphones? And tell us about the Skype involvement.

WEBBER: Both of these decisions were made very early on. We first had the idea to make something that could function in the midst of the chaos of a festival, where there's lots of drunk people and music and other shows happening around it. We thought this kind of environment could serve to embody the spirit of togetherness that we think about in the play, the togetherness that inspires art, war and so on. For this to work, the outside needed to be bigger than the inside so the inside had to be made small. So, small audience. 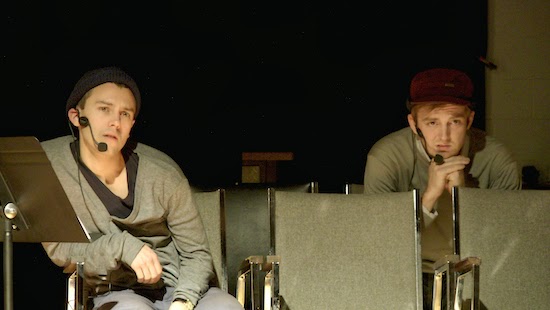 
WEBBER: (cont'd) Frank also had this hunch that with one of the characters being a recording and the other one played by a live person, that we should take some steps to place them in the same aural space—hence the headphones.

Sometimes you make these decisions early on and then you abandon them. In this case, the metaphor kept working, kept inspiring us. Everything about this piece is reduced. It's flattened and compressed—little; like the way a conversation on Skype can feel like a flattened version of the real thing. Or the way raw experience is compressed into story when it's relayed. A lot of stories seem aimed at making human experience bigger. This piece of theatre is about how a story can do the opposite, can shrink down and so bring the people connected to it closer together so they can see each other. The story needs to get out of the way. Stories matter but not as much as people.

COX-O'CONNELL: This play takes the form of a Skype conversation. Skype, and internet
technologies, allow me to feel incredibly close to someone while also feeling very far away. Being actually far away, but also really feeling that distance. The lag-time, the hiccups and being a click away from not being with each other at all. This is a tension we want the audience to feel: isolated and alone, but also part of something intimate and small and shared. Being close to something and far away is a tension in the theatre that we wanted to make apparent. But it's also a tension that exists in speaking to an old friend (also what the show is about): you have the bond of shared childhood that creates an incredible closeness. But you're different people now - there's a reason you didn't stay close. You believe in different things. And those things are probably irreconcilable. You can't go back. The piece is about closeness and distance. Intimacy and alienation. Headphones in the theatre helped us get that feeling: we're with you, but we're also really far away.