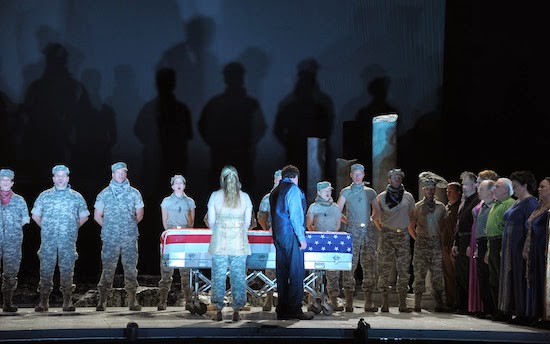 Stage director Joel Ivany is the founder and artistic director of Against the Grain Theatre (AtG). He was a recent finalist and prizewinner in the European Opera-Directing Prize for his concept of Bellini’s I Capuleti e i Montecchi with designers Camellia Koo and Jason Hand. Recent directing credits include a new production of Verdi's Macbeth at Minnesota Opera, staging Handel’s beloved oratorio Messiah with AtG, Così fan tutte for The Banff Centre, a new production of Les contes d'Hoffmann for Edmonton Opera, revival director of Le nozze di Figaro at the Norwegian National Opera, knotty together (a new work composed by Njo Kong Kie and performed in Dublin, Ireland) and the world premiere of Gavin Bryars’ Marilyn Forever, based on the life of Marilyn Monroe, in Victoria, BC. He has also served as associate director for Thaddeus Strassberger's acclaimed production of Nabucco at both Washington National Opera and Minnesota Opera. Mr. Ivany holds a music degree from the University of Western Ontario and an artist diploma in opera directing from the University of Toronto. Upcoming projects include directing the world premiere of East o’ the Sun and West o’ the Moon for the Canadian Children’s Opera Company, creating and directing Uncle John, AtG’s modern interpretation of Don Giovanni, for The Banff Centre and directing Carmen for Vancouver Opera.

There were two directors that everyone kept talking about, and I knew that I had to work with them.

As a young student just out of the University of Toronto’s Opera School, how was I going to make that happen?  They didn’t have websites and didn’t have email addresses or phone numbers (that I had). Regardless, I focused on my goal and set forth, striving to meet it along with several others. Within a few years, I had the opportunity to work with Robert Carsen in Oslo, Norway (of all places) and since, have had several occasions and in a few different countries.

After seeing Peter Sellars’ productions of the Mozart/Da Ponte operas, I knew that he was someone different.  I thought it was a huge coup when the Canadian Opera Company announced that they were bringing his production of Tristan und Isolde to Toronto.  I was fortunate enough to see it last season in Toronto and was excited to learn that he was coming back with his production of Hercules, a COC co-production with the Lyric Opera Chicago. As the schedule permitted, I was overjoyed that I could work on this fabulous show with an outstanding cast and that Peter Sellars was going to be in Toronto for the entire period of production.

“Joel, it’s so good to see you, I hear you’re working on a fabulous production of Albert Herring, that’s incredible!” and then a genuine, warm hug.

I don’t need to give a background on who he is or what he has done.  Simply Google his name or visit his Wikipedia page to learn about all of the major events and productions that he has created as one of Americas leading cultural figures.

As the first day of Hercules rehearsals arrived, I wasn’t sure what to expect.  It was all made clear from the moment I met Peter.  “Joel, it’s so good to see you, I hear you’re working on a fabulous production of Albert Herring, that’s incredible!” and then a genuine, warm hug.  From day one, this man is one of the most authentic people that I have ever met.

Peter Sellars runs a very smooth ship.  He is always engaged in the numerous repetitions, reads from a full orchestra score, is present for all of the rigours of a demanding schedule and he provides the motivation needed to inspire a chorus.  His methods are always positive, encouraging and one where artists want to give their best.  This isn’t to say that other directors don’t have these same qualities, but that Peter’s methods are genuine and have come from years of experience and fine-tuning.

During one of the more gruelling rehearsals, with less than an hour of break for dinner, it would be easy for a director to want to be alone and collect their thoughts. Peter however asked, “So where are we going to get our dinner?” A quick walk to the Brick Street Bakery in the Distillery District was called for. As we walked into the tiny bakery, Peter immediately struck up a conversation with the teller. Within minutes he had her name and the two were laughing as if they were old friends. The teller brought us over free food saying how we needed to be “fattened up”.  Peter, showing extreme thanks, gave her a hug and his infectious spirit lifted the entire bakery. Everyone’s day was made better.  All it takes is being open, striving to be positive and knowing that good collective energy is a powerful tool.

Peter’s energy carries into staging rehearsals. He strengthens his performers by instilling in them confidence, artistry and a collaborative spirit. This creates an electric environment where artists find their guided staging.  Once comfortable they explore the depths of where that staging can take them.
As an observer, this is truly a wonderful opportunity. As an opera director, theatre director or movie director, once you define yourself and your work, you rarely have the opportunity to observe, and participate in another director’s rehearsal process. You’re on your own.

Here is a man who truly believes that the world can be a better place and that the arts, culture and music play a role in that change.

As my career continues to develop, I am fully aware of how special these moments are.  To watch and interact with this opera’s highest level of interpreters is not only a masterclass in technique, but also a chance to ask questions and listen to stories; gifts that I am not taking for granted.

Here is a man who truly believes that the world can be a better place and that the arts, culture and music play a role in that change. When like minds gather, great things happen. Working with Peter Sellars has also been a wonderful reminder that there is life outside of opera. When we share those experiences with others, we have the power to be a beacon of light in a dark theatre.

I recently became a father for the first time.  In many ways, it has changed the foundation on which my future was set forth. Life is not about my career, life is not about money, and life is not about fame. Life (for me) is about making the world a better place for my son (which includes opera). Life is about music, and food, and nature, and friends and family. It is about being thankful for what we have and sharing that with others.

Peter Sellars has reminded me of this in a few short weeks.


The Canadian Opera Company production of Handel’s Hercules, directed by Peter Sellars, runs for seven performances at the Four Seasons Centre for the Performing Arts on April 5, 11, 15, 19, 24, 27, 30, 2014. Visit http://www.coc.ca for more information and tickets.
Posted by THE CHARLEBOIS POST at 12:04 AM