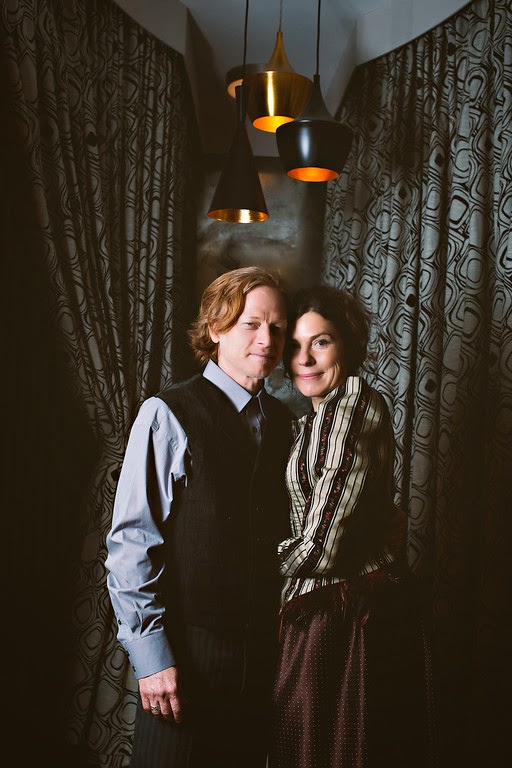 Patrick Garrow, Rena Palley (Photo by Katherine Holland)
The Sound and the Fury and the Acting
Madness and Method are Apparent in The Chekhov Collective’s The Seagull
by Spencer Malthouse
@spencemalthouse

A man taking a restful sojourn in the country finds a happy, carefree seagull. Having nothing better to do he destroys it.

Now imagine that you are the seagull. Imagine that you fall in love with this man and that he slowly destroys you crushing first your dreams, then your reputation, and then your heart. You are left cold, broken, and dying.

Now imagine you are a man who loved that seagull so completely that your despair at her suffering stifles your soul.

But it’s a comedy!


Anton Chekhov’s darkly blithe play starts with laughs and slowly transitions into a profound tragedy. Presented by The Chekhov Collective at Berkeley St. Theatre Upstairs this production of The Seagull exhibits raw and biting emotions laced with theatrical academia. The production as a whole is an over polished stone so rich in talent and theory that the subtler effects of the play are lost.

This is a play with love triangles and power dynamics galore. These plot complexities require a highly polished degree of acting and the ensemble delivers very strong performances. The tensions of the play are intricately and intensely explored – so much so that they shiver the line between accessible theatre and theatrical exercise. I found this jilting (compounded by the already jarring nature of the play) and ultimately felt that some of the acting was over the top.

Riley Gilchrist as Konstantin and Nicole Wilson as Nina both deliver deeply moving performances that would benefit from more subtlety in voice and action. I found that Patrick Garrow as Trigorin seemed particularly constricted by the flow of emotions through his hands and loins.

On the more comedic note, Sean Sullivan as Dr. Dorn is hilarious at the right moments and touching at others. The same is true for Sorin, played expertly in his illness by Greg Ellwand. Ellwand creates a tender, lovable character that anyone would love to have as an uncle. Llyandra Jones’s spitefully deadpan Masha is well played and delightfully morose.

The set is elegant in its simplicity and captures the mood of the play, which works very well in the exposed brick space of Berkeley’s Upstairs. If you like Chekhov, go enjoy this interesting exploration. If you like dark comedy or fancy a good cry, there is something for you here as well. I recommend this production to everyone who can stomach a little indulgence in contemporary performance theory.