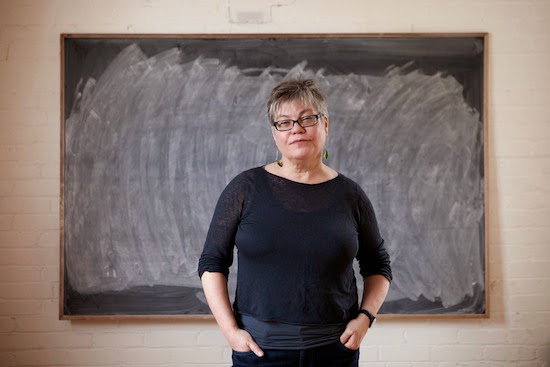 You can’t make this up: It’s the kind of story that has to be non-fiction to believe. Sea Sick, a solo performance by storyteller extraordinaire Alanna Mitchell, marks the grand opening of the new space at The Theatre Centre. Mitchell is a journalist by trade and the author of Sea Sick: The Global Ocean in Crisis (2009), from which this performance is adapted. Sea Sick is a personal reflection on the trips and interviews she conducted to help her understand and explain how climate change is affecting the oceans.

Mitchell has a TED-Talk-type delivery that emphasizes the knowledge-is-power ethos, but she also makes herself vulnerable during some touching, and riotous, moments with the audience. It’s unconventional theatre, and an example of art bringing meaning to science, which is so sorely needed with the topic of climate change. With just a table, glass, pitcher, chalkboard, and shell on stage, the focus is sharp, and the stories well-balanced between the scientific, the thought-provoking, and the hilarious. Directed by The Theatre Centre’s Franco Boni with Ravi Jain, Mitchell’s movements and moods are enhanced by the delicate lighting (Rebecca Picherak) and sound (Tim Lindsay).


The media continue to cover the more direct impacts of climate change on humans, but little attention has been given to the massive repercussions of the warming, acidifying seas. Sea Sick is a fantastic example of how to bring journalism, especially science journalism, to the theatre-going masses. Alanna Mitchell is an inspiration for her drive, research, and entertaining anecdotes of a hot and complex issue.

While Mitchell lays out a clear and compassionate case for action, the ending may raise some eyebrows. Her conclusion is eye-opening – controversial, even – because it contrasts with what you might expect to hear about solutions to what is a bleak collective action and globally systemic problem. Does the end signal that this burden of information is even too much for her to bear? The final message seems far too kind and simple; it seems like the easy way out. Of course, we can’t know the ending anyway because the story’s not over. We’re all the authors of this story.

March 19 - 23
Running Time: 70 minutes with no intermission
Posted by THE CHARLEBOIS POST at 5:02 PM