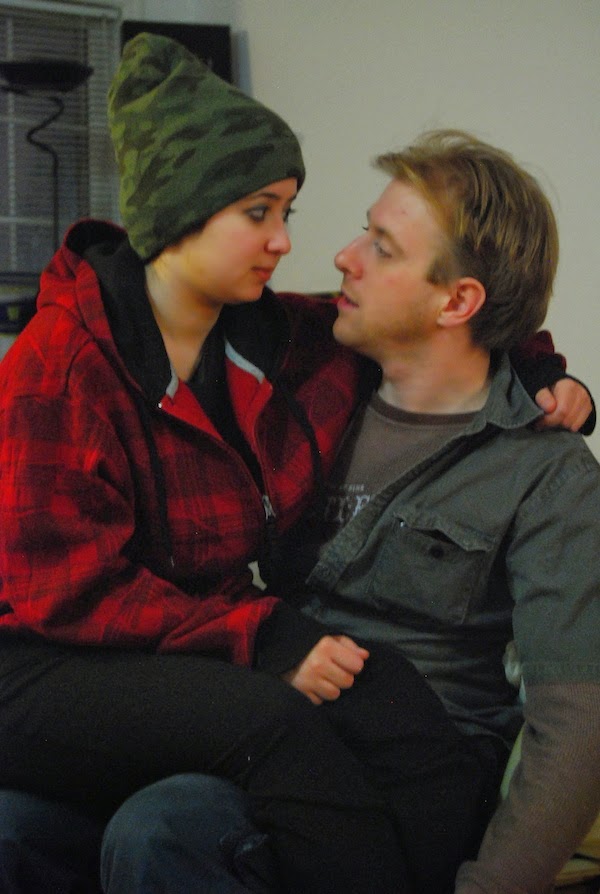 Direction is in the Details
Blackbird goes Missing
by Jason Booker

An edgy two-hander from the turn of the century, Adam Rapp’s Blackbird explores the humanity that leads Froggy and Baylis – a pair of almost anonymous lovers – to their heroine addictions and questions where should they go next, this snowy Christmas Eve. At least, that’s what Rapp intended it to do. In this staging at Hub 14, a tiny downtown indie space where all those bodies lead to a very warm room, the play doesn’t quite work.
Yes, the two actors, Alona Metzer (Froggy) and Eric Regimbald (Baylis), have to take some credit for the failure for this play to connect to its opening night audience, especially as the two of them confess to being the show’s producers as well, making this another vanity project. The pair do an acceptable job portraying these gritty roles but it isn’t enough.
So what’s my problem this time? The direction.


Sadly, unknown TJ Chelsea completely misses the mark here. It seems he didn’t have much of a concept for the show and probably treated the actors quite nicely, but there’s nothing onstage that indicates he thought of the whole play or of the audience. The play completely lacks pacing, which were exaggerated in the somewhat scattershot second half of the script; however, a good director finds the flow of those moments and makes them feel less like vignettes with a clear shift of gears at the end of each emotion.The actors are rarely challenged to find anything other than their showcase beats (hence why Metzer plays a dumbly demure child for most of the evening) and the director crafted a production here that is riddled with little errors, like the Neilson’s milk carton or the Molson’s beer in late 1990s New York City or the inconsistent limp of Baylis (left or right, large or small, he does them all!).
The set design is uncredited but feels backwards, with an onstage washroom that audiences can use pre-show or at intermission, or the mattress placed opposite the window for the titular creature to peck at, which only emphasizes how spacious this shoebox apartment (as the duo refer to it) actually is. And each of the sound cues stands out instead of becoming part of the environment.
Worst of all, the Director’s Note in the program confesses that Chelsea found the characters’ “primitive vulgarity too much for [his] middle class eyes” and it shows. Too bad that reluctance to really climb inside the world of these down-on-their-luck folks so explicitly is stated because the director's lack of compassion shows and, sadly, it bleeds into how he feels about us as an audience sitting and watching this devastation as well.
Details can show how strong a director is at his or her craft. And realism can be a challenge to stage but it needs to be real, not just melodramatic acting beats. Blackbird simply doesn’t deserve this production at all.
March 14 - 23
Posted by THE CHARLEBOIS POST at 5:54 PM