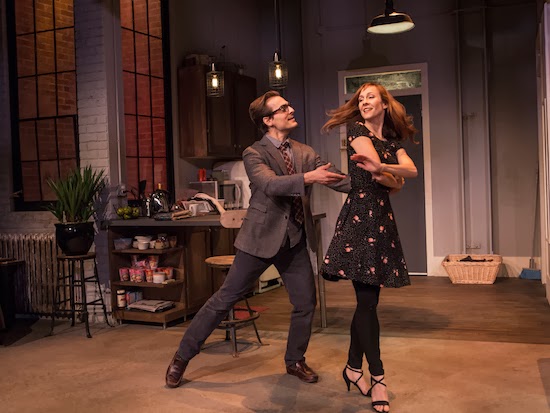 Sometimes even when everything is perfect in love, nothing is actually going right. Such is the case with our young couple in Tarragon’s Marry me a Little. This review musical, like Putting it Together and Side by Side by Sondheim before it, uses lesser known songs by master composer Stephen Sondheim (in this case, mostly songs that were cut from shows early in his career) to tell an original story – a young composer and a young performer meet, fall in love, and fall apart.

OK. So the plot may not be all that original, but in the hands of more-than-capable director, Adam Brazier, and performers Elodie Gillett and Adrian Marchuk, this piece soars off the stage. As the young writer, Mr. Marchuk is full of passion and life. His powerful voice easily fills the intimate Tarragon Mainspace, and his comic timing is absolutely to die for. But this is nothing compared to the raw emotion he exhibits at the show’s finale. As the young performer, Ms. Gillett is nearly as strong. While her voice is a tad too thin to hold its own against Marchuk’s, she more than makes up for this with her natural ease on stage – she’s funny, warm and charming, and it’s easy to see why these two would fall in love.


The show, conceived by Craig Lucas and Norman René, lacks any dialogue and is a veritable pitfall for actors and directors. Thankfully, director Adam Brazier has enough wherewithal to not only keep things moving along smoothly, but to infuse every moment with meaning. Where the original 1980 production was set over one evening in two apartments, this production has the couple moving in together and spending months (if not years) together. Brilliantly, each scene progresses as if moving through the hours of a single day and gives the cyclical nature of the opening and closing moments an extra weight. Whether any of this was Brazier’s choice, or is simply the new setting for the revised version of this piece, I don’t know. But the fact that so much time and history and story can be conveyed in one room (a gorgeous apartment designed by Ken MacDonald), with no dialogue and almost no costume changes, is a testament to the skill of all involved.

Even though the story is a tad thin and unoriginal, this Marry me a Little succeeds because it’s told with such raw emotion and honesty. The chance to hear these little-known gems of songs (and there are some remarkable songs in here) told by such gifted story-tellers is more than enough reason to catch it before it’s gone.