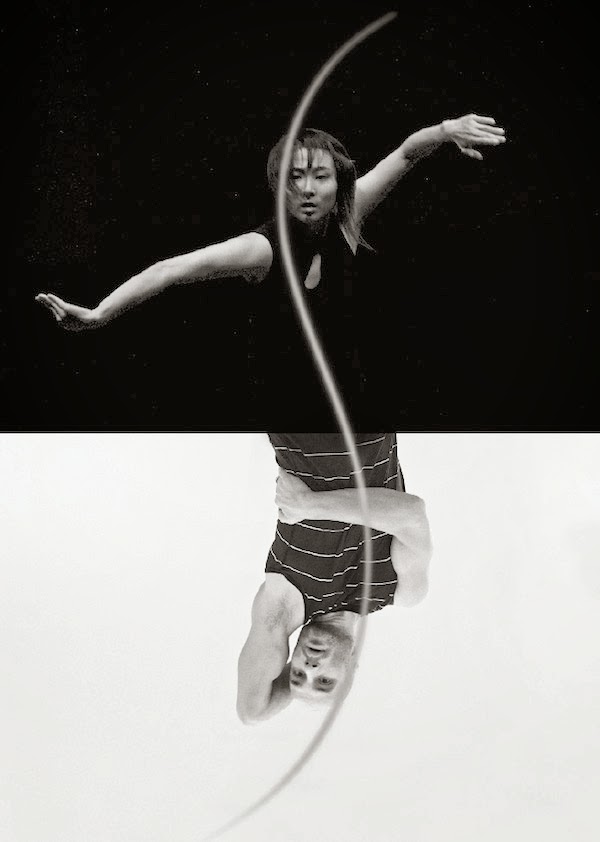 he:she is the title of a show made up of four choreographic works. Four musicians join a total of six dancers, including Peggy Baker. In the programme it states that the production celebrates ‘a world balanced by dualities’. The works do so much more than just that.

Two of the works are premieres and the two are part of the company’s repertoire. Because of this, I will address each piece individually.

1. Aleatoric Duet No. 2 (premiere)
The show opens with a duet danced by Sean Ling and Andrea Naan, with musician John Kameel Farah. Farah accompanies the dancers from above, improvising an electronic score surrounded by equipment. Ling and Naan are impressive movers. They harness a graceful strength with agility and control. They are like birds, moving in and out of shifting squares of light, crossing boundaries and merging personal spaces.

This quartet consists of one solo dancer, a cellist, a pianist, and a clarinetist. All four artists perform with an intimidating fierceness. Composer Chan Ka Nin has created a score that elicits a physical reaction. I experienced intense anxiety while watching soloist Sahara Morimoto embody the music and move in conversation with the musicians. I knew the other people sitting around me were holding their breath just as I was because I could hear and feel everyone exhale at the same time. The score is a thrilling piece of music. It is also interesting to watch how musicians move as they play.

3. Box, la femme au carton (2011)
Peggy Baker’s solo was choreographed by Paul-Andre Fortier. Baker is alone on stage with nothing but a cardboard box, which may be a metaphor with countless meanings. She continually turns on the spot but does not travel far in the beginning. The result is a deep sense of isolation and monotony. Eventually as the piece goes on, she does move downstage giving us a feeling of relief as we want her to be able to free herself from the one position.

The only piece that seemed to stick out in the program is the piece not choreographed by Baker. It felt a little out of place stylistically. Overall the works make for an intense evening in the theatre.