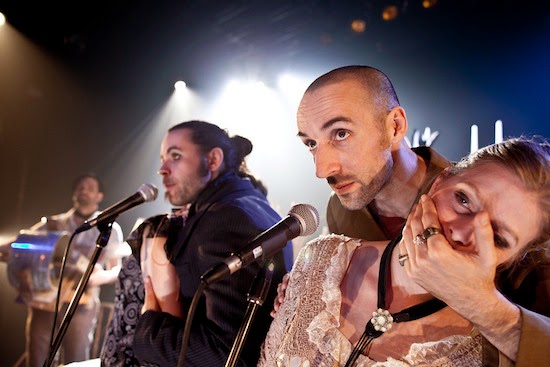 Finally something different and original on stage in Toronto!

Hailing from Quebec, L'orchestre d'hommes-orchestres are a collective of eight musicians who have taken the music of Kurt Weill and made it their own. All performers use several instruments, including their voice. Some of the instruments are conventional and played in a non-traditional way, but most are original creations. In this unique production they have created a surreal cabaret world that merges different styles of music, language, and performance.


The show is a mix of music, theatre, and performance art. Beautiful, hilarious, dreamy, and strange stage pictures are created while we watch the music and sounds being made. Household items are used as percussion instruments, we discover the sounds of everyday devices combined with traditional instruments, and we are highly entertained by the Rube Goldberg-esque contraptions that make music. Every time a performer picks up a sculpture like arrangement of items by Pascal Robitaille, you wonder how it is going to work and what possible sounds can come from it. I find the joy of wonderment a rare thing on the stages of this city. I truly loved the exploration of sound and the human body in this production.

The only thing that would have made the experience even more enjoyable would be setting the performance up like a cabaret, with tables and people standing. It felt a little strange and unnatural to be sitting in rows, watching and applauding between numbers. This group has a big sound. The music, the lighting, and the haze evoke the atmosphere of a late night cabaret that makes one want to smoke, drink, dance, and make music. Catch Cabaret brise-jour, while you can, as it will be touring to Calgary and Vancouver next.