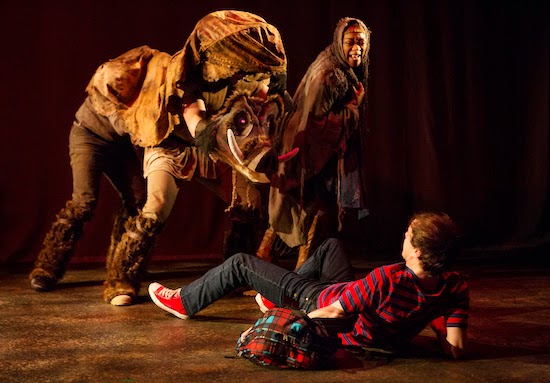 What do you want your story to be?

This is the question (among others) asked in Kevin Dwyer's retelling of the ancient Greek myth of Theseus and the Minotaur. Directed by Alan Dilworth, the show depicts a story about stories: it shows us the dangers of letting someone else write your story for you, and what it takes to push back against that. Freddie wakes up on his 13th birthday to a text from his father - off in battle - asking for help. Freddie then embarks on a journey to save his father, and in so doing shapes his own story.

The acting was as I remembered from when I visited Young People's Theatre as a child: intense, and slightly larger-than-life: Karen Robinson is a terrifying Persiphae, with commanding vocal intonation that resonates through the theatre. Jakob Ehman is mesmerizing as young Freddie/Theseus. But my favourite was Bahareh Yaraghi as Ariadne and the Gipsy Queen. When she was on stage I was totally captivated by the action. There is just something different about live theatre; it's powerful in a way that film simply cannot be. It's got a kind of magic to it, one that came out watching a hero's journey in an audience of children. There are a couple of elaborate fight scenes, and I found myself remembering what it was like to see theatre as a child. The actors always seemed imposing, and the action so real. I wondered (and hoped) if theatrical fighting carries the same magic for this audience of children as it did for me, given the updates in special effects.


A particularly poignant scene in the labyrinth was reminiscent of a Doctor Who episode, and the fantasy of the myth gave way to a kind of magical realism in which the audience was reminded that sometimes it's really our fears that we need to fear the most; that under the right circumstances it's we ourselves who can be most in our own way. During a turning point during the show, when Theseus is ready to give up, Ariadne is aghast, and demands to know if Theseus is going to stand by and allow someone else to set the limits of what he is capable of. We need to write our own stories, sure, but we also need help with those stories. We need to surround ourselves with people who will love us and support us and at times, like Ariadne does for Theseus, remind us of what we need to know or have forgotten about ourselves to continue on. In other words: we can't write the story on our own, and we shouldn't have to.

My one criticism is that the story itself was labyrinthine - there were a few interweaving plots that were sometimes hard to parse. Is Ariadne also the Gipsy Queen? And the time travel is a bit obfuscating at times, it's not clear how the journey ends back in the present. It wasn't enough to disrupt the experience too much, but it seems like the writing could use a few more clarificatory moments. Regardless, the energy of both the actors and the audience don't allow those moment to cloud the bigger story.

Running time: approximately 75 minutes, no intermission
Posted by THE CHARLEBOIS POST at 5:03 PM