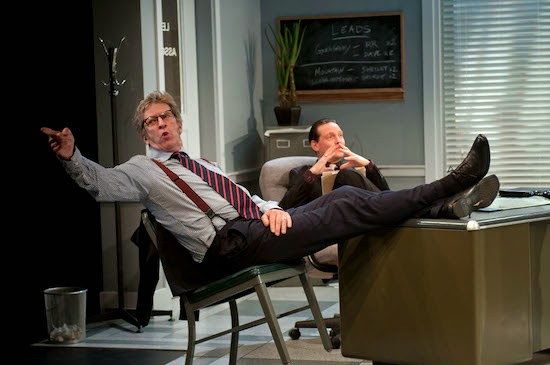 Walking into this play, I had only expected swearing and cursing, the fast-paced and dirty kind. I was not disappointed. Never had I heard of Glengarry Glen Ross, David Mamet or the movie. Shame on me! Having been provided with a program that, very conveniently, offered a short glossary of words to know, I started to understand what it was all about. In this play directed by Paul Flicker, four real estate agents in Chicago will do just about anything to sell expensive, wanted and unwanted property. They will even betray each other.


Possibly the best thing about this production are the performances. On very rare occasions, one could comment on the overall harmony of the acting; this is one of those times. Glengarry Glen Ross's all male cast was absolutely great, in sync and so charismatic. Graham Cuthbertson (Williamson) , Tristan D. Lalla (Baylen), Daniel Lillford (Dave Moss), Mike Paterson (James Lingk), Michel Perron (George Aaronow), R.H. Thomson (Shelly "The Machine" Levene) and Brett Watson (Ricky Roma) were incredible. They provided the best feeling you could get in an audience: forgetting you're in a theatre. The set design was very impressive, the first act taking place in a Chinese restaurant and the second, in a sales office after a robbery. The concept was very bright, attention-grabbing, yet completely realistic.

Bravo! The Segal Centre succeeds again with this story of working hard for a living, betrayal and how to sell your soul in the most profitable way. I would definitely recommend watching this any night, over going to see a movie. For mature audiences only. Don't bring your kids, even I learned a few new humdingers.

Running Time: 1 hr 40 mins including intermission
Posted by THE CHARLEBOIS POST at 5:12 PM