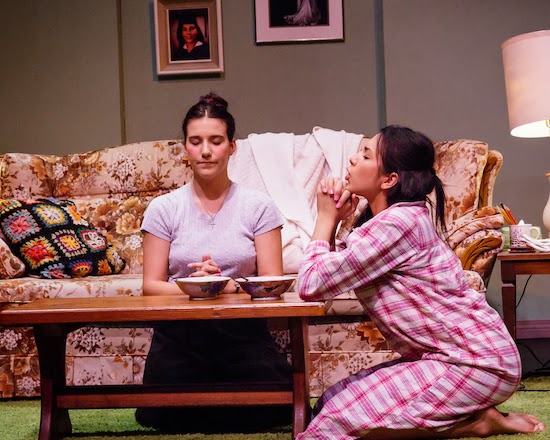 Dakota Hebert, Roseanna Superneault (photo by Barbara Zimonick)
Compel Me
by David C. Jones
Theatre that tackles issues is challenging to write. You have to go beyond pontificating about the subject matter to score easy points. Writing drama is also hard - one easy way to create drama is to have characters misunderstand what is being said and not ask for clarification. To heighten that drama just have the characters speak in half and/or interrupted sentences. Another easy device to get both issues and drama out is to have a sudden change in behaviour in character and a selective memory about the people they interact with.
Four companies came together to present Tara Beagan’s Dreary and Izzy set in Lethbridge, Alberta in 1975. The story is about two sisters, one is an adopted Aboriginal girl with fetal alcohol syndrome (FASD), the other a good Catholic girl.  There is also a First Nations vacuum cleaner salesman and older friend of the family who is a nurse who is also little bit racist.


Act One is about introducing all four characters and we also learn that the sister with FASD is sexually curious and the Catholic sister is a virgin. Both like the salesman who is noble and sweet. There are some touching moments (like when Dreary explains to Izzy about how their parents died) but nothing really happens plot wise.
In Act Two some plot and drama kicks in but using all the techniques cited above it feels a little like  Movie of the Week or as my companion said “it felt like a soap opera”.
Roseanne Supernault does impressive work as the childlike woman inside a sexually mature body. Sharon Bakker as Mrs. Harper and Garret C Smith as Freddie Seven Horses are engaging and navigate hard to justify character shifts.
As the younger but responsible sister Deirdre, Dakota Hebert has some tender moments but needs to find more modulation in her voice.
Director/writer Tara Beagan tackles several important subject matters but the evening comes off as ‘well meaning’ rather than compelling.
Also the calling of cues in the curtain call needs to be tweaked from the way it is now - 'blackout'  'lights up' 'music go' results in the two lead actors standing awkwardly in the light before the audience applauds. Change the cues to 'blackout'  'music go'  'lights up' and the audience would applaud before the actors are revealed.
Mar. 5 - 15
Posted by THE CHARLEBOIS POST at 4:20 PM