Review: (Winnipeg) Red Wine, French Toast, and The Best Sex You Ever Had (Fringe) 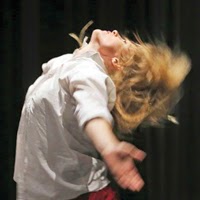 When I opened up the programme for Red Wine, French Toast, and the Best Sex You've Ever Had before the show and read the preamble by director/choreographer Jake Hastey about its origins in a trip he took through Europe due to his First World Problems and the inspiration of the Salvador DalÌ painting Surrealist Composition with Invisible Figures, I was afraid it would be one of those shows: an inscrutable, incoherent mess made up of random thoughts which make sense to the show's creator and no one else.


The emergence of a narrator of sorts with an exaggerated DalÌ moustache at the top of the show did little to reassure me, but a somewhat slow beginning gradually gave way to a much more enjoyable experience as I tuned into the wavelength of this dance/physical theatre piece, and the piece itself became more fun, flirty, and playful.

The three women (Amber Bissonnette, Tia Kushniruk, Richelle Thoreson) and three men (David Clennin, Robert Halley, Justin Kautz) performing as Toy Guns Dance Theatre take advantage of the expansive space at the John Hirsch Mainstage as they go through a wide variety of permutations and combinations in various scenes conveying the sense of a series of misadventures whilst travelling--all in the pursuit of that elusive whirlwind romance (or at least hookup) to make it worthwhile. (Although there is plenty of cake, however, the show features neither red wine nor French toast.) I particularly enjoyed an affectionately farty rendition of Queen's "We Are the Champions" and an extended sequence set to Billy May's arrangement of Nikolai Rimsky-Korsakov's "Flight of the Bumblebee."

Toy Guns Dance Theatre is a new company debuting this show at the Winnipeg Fringe Festival, and I hope they're motivated to return next year with another show just as dynamic and entertaining as this one.

Email ThisBlogThis!Share to TwitterShare to FacebookShare to Pinterest
Labels: dance, edgar governo, fringe, red wine french toast and the best sex you ever had, winnipeg