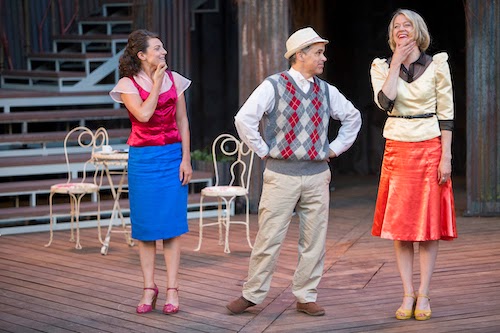 We’re all just Playing in the Forest
by Spencer Malthouse

There is something decidedly pleasant about watching a play set in a forest while sitting in a park. Watching Canadian Stage’s As You Like It while the sky slowly darkens is an enjoyable, comical, and above all accessible evening. Shakespeare in High Park is a wonderful way to spend an evening with family, friends, or by yourself.

This year Shakespeare in High Park presents two shows on alternating nights with the same cast. The first, As You Like It, is a classic Shakespearian gender-swap comedy. The main female, Rosalind (Amy Rutherford) disguises herself as a man – for somewhat abstruse reasons – and proceeds to test the amorous zeal of her suitor, Orlando (Alexander Plouffe). Along the way Rosalind takes up farming, encounters her father (who doesn’t recognize her because she is dressed as a man), and attracts the affections of a bitter shepherdess. Hijinks ensue and everyone ends up married: classic Shakespearean comedy.


The playful actors and skillful edits in this production help it to run happily along at a quick witted pace to its joyful conclusion. The play flowed smoothly to just over 90 minutes and each actor brought something special and fun to his or her role. Jan Smith as Jaques brought a droll despondency, Sean Dixon excelled in his foolish physicality, and Shauna Black was a hilariously dirty redneck shepherdess.

Plouffe is an adorably dimwitted amoureux. He captures the audience with his cheeky smiles and conveys his language well. His greatest use, however, is simply as a foil for the hugely entertaining Rutherford. Rutherford did lack masculinity in her voice but not otherwise in her amusingly over-emphasized physicality. She contrasts the masculine and the feminine in a tritely way but with effortless comedy. We giggle girlishly along with her at Orlando’s advances as she leads him a merry chase about the stage. Her reaction to Plouffe’s bum is both hilarious and accurate.

I confess the costuming was simplistic. Plouffe’s little yellow suspenders certainly made him cuter (he really is adorable) but otherwise not too much exciting happened in wardrobe. The set also failed (somewhat spectacularly, considering the context) at evoking the forest. That said, since the backdrop was a bunch of real trees, I’ll let it slide. The Mexican wrestling gimmick did not work but I can see the kids in the audience enjoying it. Really, I think that is the point of this production and Shakespeare in High Park in general. This is accessible, easy to understand, fun-for-the-whole family Shakespeare. It is not particularly profound but it completely succeeds in being enjoyable.

Go and enjoy an evening in the park. The fresh air and greenery will do you good and I promise you’ll giggle at the play.

Email ThisBlogThis!Share to TwitterShare to FacebookShare to Pinterest
Labels: as you like it, Canadian Stage, spencer malthouse, theatre, toronto