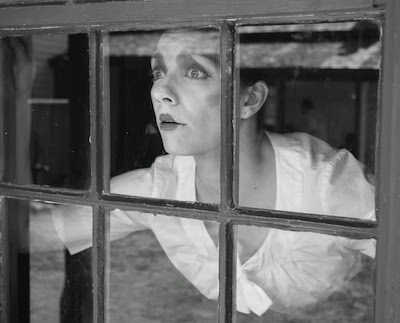 Back To The Future (of Fringe)
by Jason Booker
A silent film, presented live, with actors in whiteface makeup, exaggerated physical gestures, onstage musical accompaniment, sepia-black-and-white costumes and projected title cards. Well, actually Gold Fever is a double-bill, that takes the audience back in time.


A curtain-raiser called Scarborough Fever features a young female pioneer battling a bear in an adorable scene, though there’s a strange frame about “remember the story” tagged on. And really, who doesn’t love a stuffed pig onstage?
Following that is the main event, Gold Fever, set in 1899 amidst the infamous Gold Rush, which begins with some devastatingly quiet and bleak sequences travelling through the snow, detours to a hilarious canoe ride down the rapids (now that is physical staging!) and deposits the audience in a saloon owned  by Titi McGibbons (Sarah Joy Bennett). Her name does indicate why she owns a saloon and what else might go on there. Her customers include milk-drinking Gormless Joe (Phil Rickaby) and Pemmican Pete (Stephen LaFrenie) – both of whom are in love with Stella (Dana Fradkin). Performances are skilled and enjoyable, though a little shallow.
The musical stings of David Atkinson’s live piano wonderfully underscore the action but also give modern context with strains of Greig’s Morning theme, Satie’s Gymnopédies and a dash of Super Mario working their way in.
The show is fun though slight, an exercise in style that hasn’t been polished into a finished gem yet. The climactic scene feels forced and rushed, some of the earlier sequences seem unnecessary or repetitive and, ultimately, is the show only about making an audience smile – or is there something more that people should walk out thinking about? However, there is lots of promise in this premise and Gold Fever is a great adventure into a new genre at the Fringe: worth a try.
July 2 - 13
Posted by THE CHARLEBOIS POST at 7:46 PM