Keir Cutler on the "I'm A Genius" Syndrome, Part III 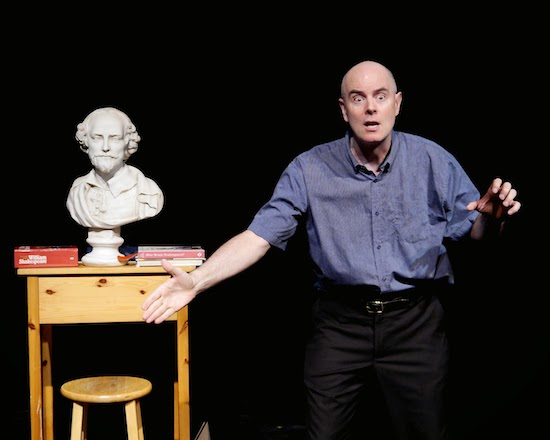 This is my third look at the “I’m a Genius” Syndrome.  In the first two instalments I looked at how various artists can see themselves as such geniuses that they will not rewrite, correct or alter their art, even when it’s necessary for the success of the work to do so.

Theatre is a safe place to talk about unsafe things.

I’ve had different encounters with this type of audience member.  My most legendary interaction was in 2007 when a woman in Winnipeg reported me to a child protection charity for performing my hit monologue “Teaching As You Like It.”  She, in her solitary genius, had understood what critics and audiences in seven cities had not seen, that my theatrical monologue was “a violation” and should be condemned because it “promotes the idea that sexual predation of underage girls is acceptable.”  She raised this complaint in a letter sent out after the show had closed, and I had left town.

I only learned of her hateful act by chance. The head of the Winnipeg Fringe received a copy of her letter, and felt I should know what the woman was doing. I was outraged. Theatre is a safe place to talk about unsafe things. What this woman had done was try to tell me, “Theatre is not a safe place, and certainly not for an artist.”  And this was done with breathtaking arrogance.  She knew the play was a hit, in fact her problem with the production was largely based on the laughter she heard coming from the audience.  To her laughter only meant one thing, that something was not being taken seriously; in this case, a monologue about a relationship between a teacher and an underage student.  What she failed to see was that laughter comes in many forms; not only the superficial.

If I were truly making fun of the serious issue of sexual harassment, it’s hardly likely the play would have received multiple five star reviews, including one from her hometown Winnipeg Free Press, been praised by the mayor of Edmonton and held over in that city for extra performances, even received kudos from a Toronto psychologist who treats abusive priests!

But no matter the success of the work, she was entitled to her opinion. Where she went over the line was the forum she used to express her views. She had many online sources to voice her disapproval, but she’d waited until after the festival, and contacted an organization that could not possibly know the truth of her claims, or even investigate her accusations. In the end her actions were nothing other than a smear.

It seemed to me then and now that a theatrical artist has a kind of social contract with an audience.  The creator/performer should not be confused with reality. Crimes committed onstage are not to be understood as real crimes. This woman had shredded this social contract. She acted maliciously, and thoughtlessly.  And her actions came from her belief that her unique genius trumped all others.

I was able to have the last laugh when the following year I came back to Winnipeg with a play based on her letter. Teaching the Fringe, directed by TJ Dawe, (all my monologues mentioned in this article were directed by him,) was the hit of the festival that year, and I received a long and loud standing ovation from the sold out opening night crowd. This woman’s hostility towards me had led to even more art, and for that I’m in her debt.

I had reason to think of that 2007 episode just last month when I opened my new show, Shakespeare Crackpot at the Montreal Fringe.


I had a wonderful opening. The show went like a dream. People laughed at the jokes, and applauded warmly at the finish. I received two stellar reviews from opening night, one reviewer calling the play, “highly recommended.” (The play has received a total of five positive reviews overall, and so far none negative.)

Yet, someone disliked my performance opening night so much that they raced to the Internet right after the show to ensure they were the first to post on the Montreal Fringe site the following, “Shakespeare, crackpot – Unfunny, uninsightful, non-refundable. … Dull and tedious, … there is very little to see here.”  This was cowardly done under the anonymous initials “BH.”

In this case, the detractor got the venue for his attack right, but again I was dealing with a 'genius'  audience member who felt his or her opinion should tower over all others present at the performance, and had to be immediately distributed to the world before any positive comments could be voiced.

Once again, this person is entirely entitled to their opinion, but there has to be some level of self-restraint when posting anonymously. If an audience member doesn’t have the courage to put his or her name on an attack, should they spread their hate worldwide on the web? The answer has to be as resounding, “No!” Particularly when the action is likely to damage the box office of a self-funded artist. The comments in question remained the first thing on my show’s listing page at the Montreal Fringe, and probably dissuaded many from buying tickets online. I had my weakest box office ever at the Montreal Fringe, despite having nothing but stellar reviews.

What is also disturbing with an anonymous poster is the ability to hide an agenda. It seems in the latest case that lack of humour and insights in my piece were not the real problem since the play, at least according to the reviews, is full of humour and replete with insights. More than likely it was the message of the monologue where the real issues lay.  The anonymous poster may be an educator who didn’t like being skewered, or as one critic described Shakespeare Crackpot, “delightfully mocks all those lecturers and professors who stank up our academic lives.” Of course this is where anonymous posting becomes insidious; my box office may have been damaged maliciously with intent to mislead the public. But whatever the motivation, allowing anonymous posting directly onto the site where tickets are sold is unacceptable, and too open to abuse.

The power of the individual has never been greater. The Internet levels the playing field in a way that is not in fact democratic, it is actually closer to autocratic, since it allows anyone anywhere to post anything anonymously, sometimes with devastating results. A professional reviewer operates under guidelines, and the named blogger hopefully has a reputation to uphold, but using the Internet anonymously to trash theatrical work is highly problematic. One likes to think that people understand anonymous comments online are suspect, but is that really the case?

The anonymous poster can defame without accountability. This is particularly difficult in the realm of theatre which is always challenged economically.

On the positive side, I have a very strong production that I will be taking on the road in 2015, and the anonymous poster’s comments are so extreme, that I am already using his/her statements in my publicity for the work. It’s amusing to see “unfunny, uninsightful,” attributed to “an anonymous online commentator, probably a professor,” beside “hilariously insightful” attributed to a named reviewer.

Finally, for what it’s worth, as a performer who travels across North America doing theatre, I’d like to request to all rogue audience members, if you’re going to spread your unique views publicly then do this carefully, in the proper forum, and never anonymously. We as artists have invited you into our lives in the theatre, and we greatly appreciate your patronage, but ultimately, you are guests in our theatrical homes, and you must act respectfully as proper guests, regardless of how convinced you are of your solitary genius.

("I've loved having theatre reviews and articles to read on The Charlebois Post over the last few years and writing my own thoughts, I will miss it greatly.  But good luck with your change!")

Read Part I
Read Part II
Posted by THE CHARLEBOIS POST at 7:24 PM