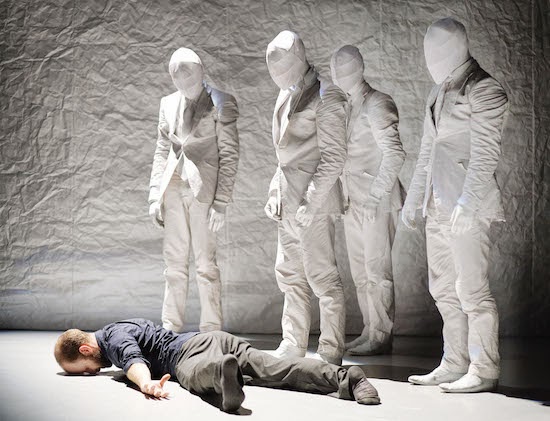 After a spectacular presentation of Dark Matters at Canadian Stage in 2012, expectations and anticipations were high for the return of Crystal Pite and the Kidd Pivot company, with the premiere of The Tempest Replica.

As interesting as the piece is, it fell short of amazing or impressive. There were a few select scenes that were imaginative and danced beautifully, but as a whole the production did not hit us the same way Dark Matters did, even with the strong storyline.

The Tempest Replica tells a summarized story of Shakespeare's The Tempest through movement, projection, and a few lines of text. It starts with Prospero, folding tiny paper ships as the house enters. The show opens with the shipwreck and a massive storm. This was perhaps the most effectively staged part of the show and it was within the first five minutes. A large billowing fabric mimics the tumultuous waves and the four dancers depict the chaos of being in a torrential storm.

Like all of Shakespeare's work, the piece is split into five acts and an epilogue. Prospero, Ferdinand the Prince, and the spirit Ariel are the only characters to actually have names. In the first half, Prospero is the only character in regular clothing with his face visible. Other characters are clad in white costumes with full coverage faceless masks, suggesting an almost inhuman quality. Are these nameless people merely symbols and signifiers in this chaotic world? Later in the piece the white costumes and masks are shed and regular clothing and faces are seen. All of a sudden we are looking at real people. It is a strange choice.

There are some very strong and beautiful duets including one a between Prospero and his daughter, and her again with the Prince. These gracefully athletic duets are contrasted by action-based movement during other sections of the piece. Those parts are very theatrical and embrace the melodrama that is quintessential Shakespeare. These ‘acty’ moments can be funny but often appear mime-like and predictable. It also happens quite a lot in story ballets, where the choreographer really wants to make sure we get the story and the emotion without Shakespeare's flowery text.

In The Tempest Replica there are a few lines from the play projected and incorporated into the sound design. They were aesthetically very pretty to look at and listen to, but the design lacked innovation and originality.

In all, there was nothing I disliked about the production, but there was also nothing that I loved or was able to hold on to. Perhaps expectation got in the way, but it is a hard thing to ignore.