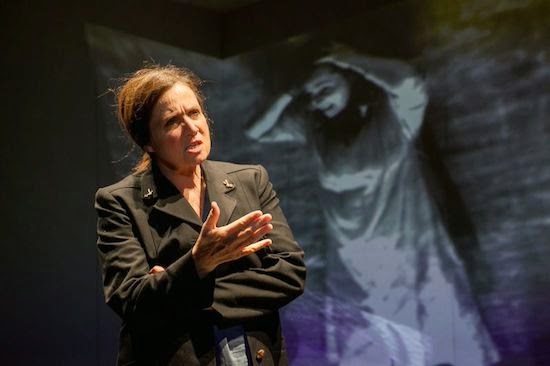 (photo by Wendy D.)
A story of isolation, desperation, and confinement where no one is left untouched.
by Keely Kwok

Judith Thompson’s Watching Glory Die is a wake up call shouting to its viewers: do you see? Do you even know?

The play was inspired by events surrounding the death of Ashley Smith, a 19-year-old girl who asphyxiated herself while her prison guards stood, waited, and watched. Thompson plays a young girl named Glory (based on Ashley), her adoptive mother Rosellen, and a correctional officer named Gail. As the sole actress in the show, Thompson swiftly flits in and out of these three women and delivers three distinctly different powerful performances.


Glory is the most alienating to watch. She has been an inmate for five years, ever since a minor offence of throwing crab apples at the mailman saw her sent to a correctional facility at 14 years old. Video of Glory protesting, pleading, just pulsing, is projected onto the walls of her sterile white isolation cell. Thompson moves about the space, folding herself into the corner, rolling around on the ground, and flipping off the camera like a caged animal. The worst is when she mimes being seized by the straightjacket and helmet they make her wear so she can’t even move her head. Thompson layers Glory with an exasperating sense of desperation and loss of innocence alongside and in between a fierce, youthful rebelliousness. Glory is more than just an inmate. She is a person.


Thompson also makes it inescapably clear that Glory is not the only one to suffer the system. Rosellen endures pain and heartache from being separated and kept in the dark about her daughter. Gail, the tough-as-nails officer is also trapped by the orders given to her. She cannot lose her job and she must follow her orders. None of these women can escape the isolation of the system that has them entrapped. A fact further emphasized by one woman playing all three characters. And that is the point of Thompson’s poetic language and purposeful phrase: it affects us all. We are all responsible.

Though the content is eye opening, its language enrapturing, and performance ever chilling, the show is a little tech-heavy. With a multitude of transitions and a lighting cue to accompany each one, it’s rather jarring and moments are lost in the shuffle. Each woman has their own lighting and designated space on the stage yet Thompson seemed to have trouble getting on and off the raised stage of Glory’s cell. The sound as well was overpowering, especially in such a small space.

Nevertheless, technical issues aside, Watching Glory Die is a story that needs to be shared. And Judith Thompson has done so with poetry, compassion, and pure untainted artistry.

May 15 - June 1
Read also: Judith Thompson's first-person piece on bringing the work to Toronto
Posted by THE CHARLEBOIS POST at 5:36 PM