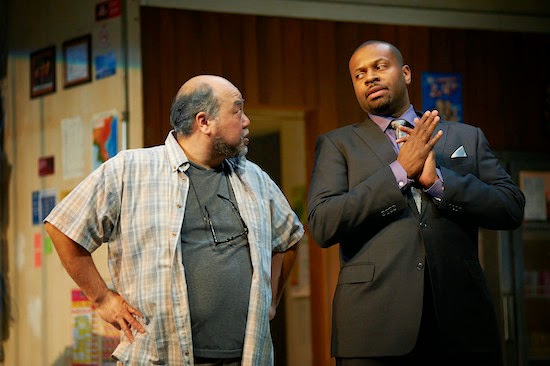 Kim’s Convenience is quintessentially Canadian, about a Korean couple in a multicultural Toronto neighbourhood overrun by condos.

It’s a classic immigrant story of a new arrival opening up a business and working long hours running it with the help of his wife and two children. The kids were born in Canada, so the play lays bare the within-family cultural clashes that arise between immigrant parents and their Canadian-born children – and how much the two generations can learn from one another.

A developer is pushing hard to buy Kim’s Convenience, but Mr. Kim won’t allow his customers to lose their shop, and is loath to see his legacy reduced to rubble. He wants his daughter, Janet, to take over; at 30, she has yet to leave the nest, and he’s worried she’s wasting the opportunities they gave her on a photography career. To him, it’s a matter of giving back after all that he gave her; to her, it should be her life and her own choices.

She’s also single, and as her parents are giving up hope of her marrying, a customer seems to be a potential suitor – leading to some slapstick comedy with the pair and the overbearing father. An hour in, the play begins to lag a bit, and seems to be veering towards trite territory, but the storyline of Janet’s brother, Jung (portrayed by the playwright, Ins Choi), saves the play with a compelling drama to wrap things up.

The highlight of this production is certainly the memorable performance of Paul Sun-Hyung Lee as Mr. Kim, or Appa, the Korean term for dad. He’s very funny, and absolutely charming. He’s comical, as well as bloody-minded and prejudiced, but his strength of character and tenderness shine through as well.  The characters of both parents are laden with Korean stereotypes, although they seem much more genuine in him than in his wife, as portrayed by Jane Luk.

The set is fantastic, as it really looks like an entire convenience store has been transplanted to the Granville Island Stage. The attention to detail is remarkable, as it’s fully stocked with candy and chips, as well as magazines, lotto ads, and even a little map of Korea on the wall. Almost the entire play takes place in the shop, on the same day (and the one other setting has just the right subtle change to set the scene in a church); the elaborate set design gives it a great sense of authenticity.

The play is semi-autobiographical for Ins Choi, who grew up in Toronto above his family’s convenience store; he describes this play in the program notes as a love letter to his parents and to all immigrants. It strikes the right balance of humour and humanity, as the audience laughs at Mr. Kim’s eccentricities, English troubles and stubbornness, but also grows to respect and care for him, and understand his position in the fabric of Canadian society.

The play was workshopped at Toronto’s Soulpepper Theatre, as Choi is a graduate of their Academy. Kim’s Convenience is directed by Weyni Mengesha.