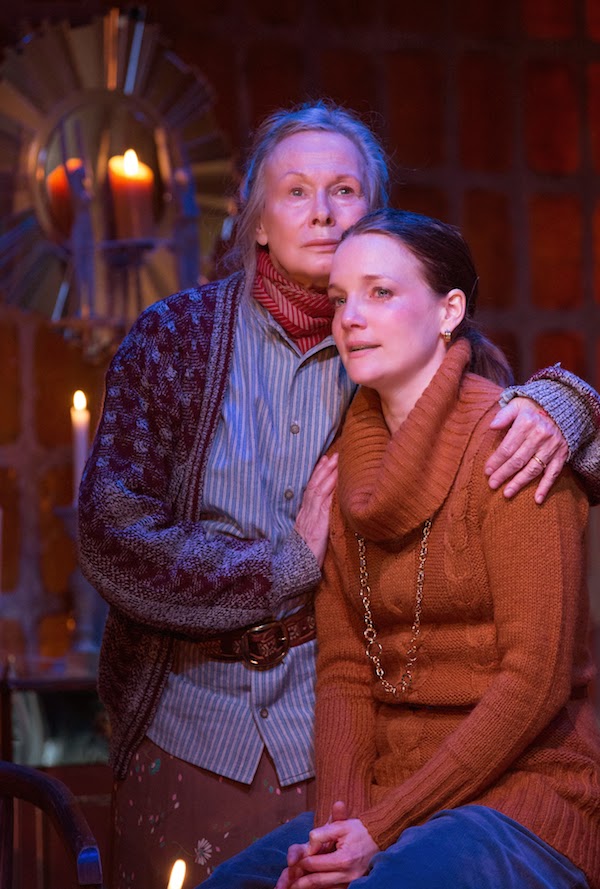 Together Apart
by Zoe Erwin-Longstaff

The beginning of The Road to Mecca, now playing at Soulpepper’s Michael Young theatre, is jarring. A young schoolteacher, Elsa (Shannon Taylor) bursts on stage and crankily snaps at her unsuspecting hostess, Miss Helen (Diana Leblanc). An elderly widow, Miss Helen lives in the Afrikaans small village in South Africa and Elsa has travelled 12 hours from Capetown for this visit – why? We’re not sure. On the highway she ran into a poor African woman carrying her newborn baby in the stifling heat. It is this kind of injustice that incenses Elsa, and she has a vituperative way of taking it out on Miss Helen.  But what is slowly revealed through the first act is a foundation of fondness between the two women. Furthermore their exchanges do aptly demonstrate different kinds of rebellions. For all her tongue-lashings, Elsa deeply respects Helen, with her quiet but powerful bucking of the status quo, her steadfast commitment to her art at all costs.


In fact, Miss Helen’s art is what links these unlikely friends. Five years before the pair met when Elsa found herself at the foot of Miss Helen’s imposing statue garden. The garden is filled with large owls, cherubs, and distorted human figures, 'monsters' as Miss Helen refers to them. She keeps up the garden, despite the dissenting voices of the town she has spent her entire life in. But besides this unorthodox public expression, Miss Helen holds many conventional ideas of propriety.  She thinks that Elsa should apologize for ruffling feathers at her school by having the children write letters condemning racism; and she tut-tuts at Elsa’s relationship with a married man. The first act is too overt with its exposition, but when Elsa lets her guard down the discussion between the women is sweetly drawn out.

The second act is much more satisfying, as the real conflict of the play unfolds. Marius (David Fox), the local pastor drops by and we find out Elsa has driven all this way to protect Miss Helen from him. He’s come to convince Miss Helen to sign a paper committing her to an old age home.  Elsa believes this is to stifle her creative rebellion; Marius assures them that he is truly concerned for her health. The two try to shout each other down over a cowering Miss Helen in some of most poignant moments of the play, as it’s genuinely difficult to parse out who is right.

Finally allowed to speak for herself in the play’s seminal moment Miss Helen gives a complete and compelling vision of the difference between the world she and stone figures inhabit and the conventions of her small town. As she speaks candles are illuminated all around her, framing her transcendently.

In fact the lighting is effective throughout. With the stage showered in a dusty orange, it conveys the arid heat of the Karoo desert. The set is appropriately eclectic, scrupulously detailed with knick-knacks and lanterns, a conventional little cottage but with Helen’s strange figurines encroaching from the periphery.

The Road to Mecca is a complex play with delayed insights. Though it is not one of Athol Fugard’s greater efforts, it nevertheless imparts to us the stifling daily oppressions of Apartheid, as well as the importance of art and enduring friendship in times of adversity.