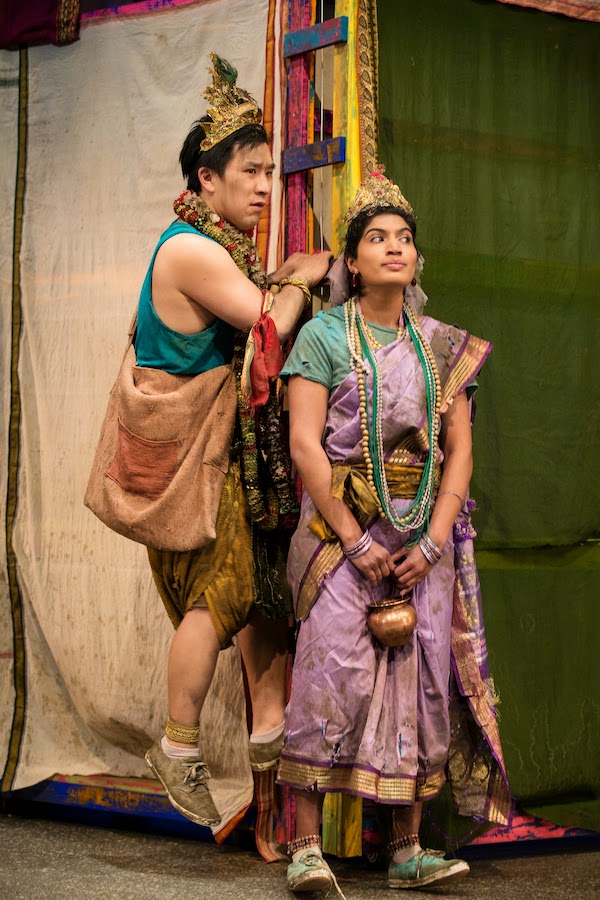 (photo by Cylla von Tiedemann)
To rags from riches and back again:
An awkward tale of recognition and redemption.
by Lisa McKeown
@lisammckeown

Directed by Nina Lee Aquino, Sultans of the Street is a new play commissioned by Young People's Theatre, written by Anusree Roy. This is a story about four children in India, who are being manipulated and coerced into begging for money on the street by their cunning 'Aunty'. Two are a couple of siblings who were orphaned by a train crash; two are rich kids blackmailed into begging.

The show is undeniably gorgeous to watch. Camillia Koo's set design is both beautiful and functional: there are four rotating walls covered in colourful saris that serve as doorways, street corners, shops, and windows.


The play focuses on the development of the two sibling relationships, and on the growth of mutual respect and recognition between the younger siblings and the older ones. It also focuses on the antagonism between the two rich kids and the two poor ones, so good acting was necessary to motivate the plot. Richard Lee was one of my favourites, playing the youngest of the children at seven years old, and managed to convey Chun Chun's youthful naiveté and enthusiasm energetically but authentically, without making the character clown-like. Overall the acting was excellent, though Mina James tends to hit the same stubborn note with her character a bit too often, making her quick concessions at the end of the play slightly less understandable. There are also a few plot holes that are a bit distracting - at the beginning of the play, the rich boys steal a couple of oranges, and when Aunty catches them she blackmails them into her begging ring - a flimsy motivational point, since it's not clear why the boys couldn't just pay the vendor for the oranges that they stole. And at the end the Aunt confesses in detail the crimes she's committed in a way that is frankly forced: kind of like the way the James Bond super villain confesses his entire plan and then is surprised when it doesn't work out. A needless confession when it's been obvious to everyone from the beginning what must be going on.

The story nevertheless still has a lot of great elements: it explores themes that are key to life, and especially children: it looks at both what it means to trust someone, and what might happen if that trust is put into the wrong hands. And that comes out in the discussion after the play: it's the very nature of our condition, of life, that we have to trust, and we cannot know for sure if those we choose to trust are trustworthy. One of the children in the audience pointed out during the Q and A period that the children finally decide to put their trust into the hands of someone else, but how can we tell if this new person will be worthy of such trust? How can we base our trust in people on the feeling that we can trust them, when feelings can be so misleading? Really good questions, and no simple answers.