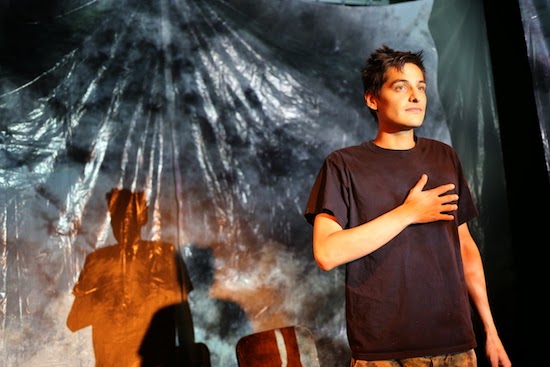 The set for huff is stark. There is a chair, a couple of plastic milk crates with beer bottles in them. Long white plastic drapes hang in the centre of the stage and various images can be projected on them.
I do not want to give the storyline away so I am going to draw from writer/performer Cliff Cardinal's and producer Elizabeth Kantor’s own defining statement. The focus is “on the creation of new transgressive, cathartic works that explore the pain of people living in taboo subcultures”.

What this means for an audience is that unless you are already intimately familiar with the subculture and despite everything you think you may know, you still may find yourself shocked, jolted or even repulsed. Cardinal writes very well and as an actor actively engages the audience to get every reaction he can from them even though his characters may feel that we are nothing more than a hallucination brought on by auto asphyxiation or gas inhalation.

Karin Randoja has directed the piece with an understanding of the vision, that despite society having given up on them, these characters, in their own way are loving and loveable. Their dreams have been crushed by circumstance and they need mind altering assistance to achieve a hallucinatory vision that allows them to escape their painful reality.

There is no judgment of the characters in this play and there is also no solution offered. Society often brushes past and would prefer to ignore the elements that are broken. If there is a message in huff, it may simply be: take the time to see us, no matter how difficult it might be to look at us.

April 29 - May 10
Running Time: approximately 1 hour with no intermission
Posted by THE CHARLEBOIS POST at 4:31 PM