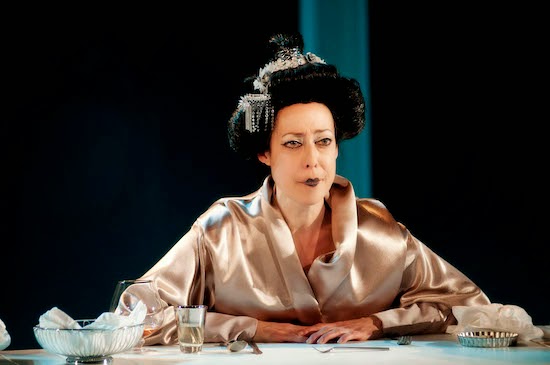 In career girl Marlene’s dream hosting gig, five top, barrier-breaking (but historically overlooked) women come to sup and celebrate. They are toasting Marlene’s promotion at a job placement agency, no mean feat for a woman during Thatcher’s reign in early ‘80s Britain.

The opening act of Caryl Churchill’s play is a dinner party tableau that evokes both Judy Chicago’s famous feminist table and The View’s cacophony of lady voices. Each dinner guest delves into stories about childbirth, fathers, death, lovers - but to illustrate how lonely they may have been in their own times, they chatter over one another at length. As one poignantly reminisces about her child, Isabella wades in: “I never had any children. I was fond of horses.”

This may intrigue you or put you off completely. Top Girls seems to have that polarizing effect on people.

In preparing to write about the play, I came across a voxpop of theatregoers who critiqued a performance in New York a few years ago to the Times. While some found it interesting and timely, others bluntly called it “gibberish” and the “first production I’ve walked out on.”

Micheline Chevrier, making her Segal directorial debut, directs a fine coterie of talented actresses through a complex play. This interpretation has winning performances and design on its side, but Churchill’s piece, though cerebral, is not easy to love. Following the delightful time-bending dinner party, we leave our myriad heroines and delve exclusively into Marlene’s personal story, exploring family dynamics, feminism and class warfare at work and at home. The dialogue can be long, and the play structure halting. By the end, we slip into soapy British melodrama.

Costume designer Mylène Chabrol has clothed the historical women in pleasant monochromatic grey and silver shades, and the ‘80s costumes feel spectacularly snazzy and on point (at least to someone born in 1988). The wide, sleek Segal stage is carpeted in white, leaving huge expanses for the busy dinner scene to breathe but making the smaller, more emotional moments feel almost cavernous. Thumping synthpop and new wave music make the long transitions pass fairly smoothly (if you like that kind of music).

Churchill’s work is prized for its intellectual dexterity. Born in 1938, the top British playwright is still active and writing. (Fun fact: she moved to Montreal aged 10 and attended Trafalgar School for Girls in the ‘40s and ‘50s.)

And so there is a lot of intellectual meat to seize upon here. We’re in an age where women have reached the higher echelons of success, but still struggle against sexism. Hillary Clinton may be the next president of the US, but people will still ask if she’s too old for the job. There are plenty of women pundits around, but if any of them get out of line, it’s okay for anonymous commenters to hurl racist and sexist threats at them. Top Girls is a reminder of how far we’ve come since the 800s, the 13th century, the 1980s - and how far we have to go to.

That being said, Top Girls will not be everyone’s cup of tea, but you should take a sip and decide for yourself.

Running Time: 2 hours 50 minutes including intermission
Posted by THE CHARLEBOIS POST at 4:34 PM