Review: (Toronto / Theatre) Who's Your Daddy? 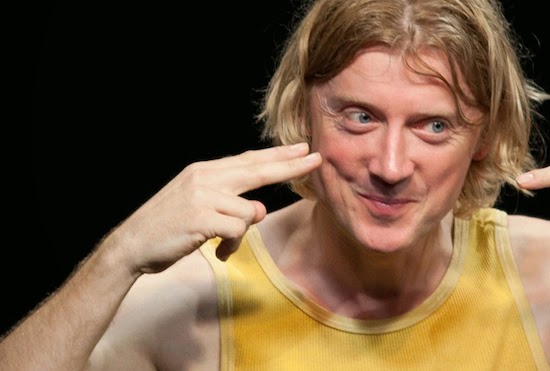 (photo by Nancy Savan)
The Joyous Tale
by Jason Booker

Warm fluorescent lighting reveals a man hunched up on a papier maché rock: an oddly placid opening to an exuberant piece. But that juxtaposition typifies Who’s Your Daddy, being performed as part of the East End Performance Crawl, a collection of solo shows performed in strange new places in a lead-up to Crow’s Theatre opening their new space.
Mostly performer/writer Johnny O’Callaghan wows with his storytelling. But is that because he – to invoke his own stereotypes – is an outgoing Irish actor, performing chunks of his own life, in a story that he knows ends joyously? Is that because, as an openly bisexual man, he is performing a show about his adoption of a Ugandan orphan show in LGBTQ-friendly Toronto? Is that just because he knows this story so well and has told it so often or because he is an outstanding actor? Or do those all roll into one and become negligible while watching?


However, the first 20 to 30 minutes of Johnny O’Callaghan’s show features him bouncing around the small space, bouncing around a timeline and bouncing through some odd designs.
The space: the show has previously appeared in Los Angeles, New York and Edinburgh. So I have to assume that local director Aaron Willis’s contribution involves making the show and the performer fit the setting and negotiating the design and technical elements. He mostly succeeds – though the use of space sometimes felt erratic and sometimes unnerving, even unintentionally so. Sometimes multi-purposing a furnished loft (as T.J. Dawe’s Medicine also uses the space) isn’t the best way to stage a 90 minute show that demands a bit of finesse in its staging.
The timeline: between O’Callaghan alighting from his plane in Uganda, the story of running into the actress who convinces him to video-document her journey to an African orphanage, losing his job and his dog in Los Angeles, walking in on his cheating boyfriend in the act and various pieces of his parents and childhood, the opening of the show feels abrupt and muddled. In film, a montage of these elements might work. Theatrically, it starts the audience on the wrong foot; confused and unsure of why these details are needed, jolting back and forth from moment to moment without ever allowing them to understand the terrain, the world of story that is being entered.
The designs: the distracting tarpaulins suspended above the audience are likely from Medicine though the issue was never addressed by nor credited in O’Callaghan’s show. Zach Williamson’s sound design became very crowded in certain sequences – a ride along a bumpy African road or a raging nightclub – but curiously absent throughout much of the latter parts of the show. Oddly, a costume designer is credited for O’Callaghan’s hoodie and jeans though no one receives a credit for the lights - whether they belong to the loft or the Performance Crawl.
Nonetheless, Who’s Your Daddy largely works. An interesting mono-journey, autobiographical and well performed, touching and intriguing though inevitable, the show simply needed a stronger dramaturgical hand at the top to guide the audience into the piece and justify the order and duration of the moments. Once in his groove though, telling the story in longer sections and focusing his narrative on the young boy he wants to adopt, his legal woes getting the paperwork and permissions and the sense of family he wants to create –the sense of family he had growing up himself – the play entertains and informs.
May 21 - June 1
Posted by THE CHARLEBOIS POST at 4:58 PM