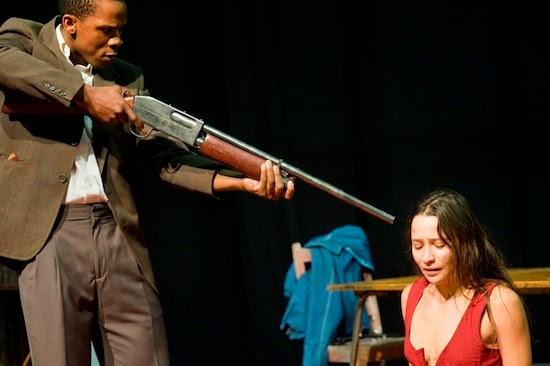 The overly warm theatre. Filled with smoke. A vivid red dance floor, painted to look like broken stone tiles. A slowly spinning plantation-style ceiling fan. An old stove turned upstage.
Welcome to South Africa. Specifically the fictitious Veenen Plaas (meaning Weeping Farm) in the semi-desert region known as The Karoo.
And welcome to a show that comes at a fever pitch, intense and shouted and bouncing off the furniture, where strangely the stakes never seem as high for the characters as they do for the symbols and history they represent.
Welcome to Yaël Farber’s Mies Julie.
This is a world where melodrama rules, where the only quiet moments come when the ancestors are invoked and the live-performed score (featuring incredible vocals from Tandiwe Nofirst Lungisa) is permitted to overwhelm the audience’s experience.


While director and writer Farber has adapted August Strindberg’s 1888 classic Miss Julie into a parable for apartheid in South Africa, she failed to make the play connect with a modern audience. Using historical references doesn’t necessarily translate to theatrical, especially for an international audience removed by time and location from the events cited.
Basic plot: John, a servant, polishes boots and converses with his mother, the domestic Christine, when Julie enters the kitchen and implores him to join in the dancing going on as her father is away. Julie is the privileged daughter of the farm’s owner, though largely raised by Christine. When the night’s alcohol, the festivities, their age, their hormones and the freedom and isolated conditions of their environment come together, John and Julie have sex. Yes, rather graphic and violent sex in front of the audience. Then, the next morning, the pair must deal with the consequences and figure out how to face the future.
The most significant change from Strindberg’s original shifts Christine from fiancé of John to his mother. Since the most grounded and satisfying performance of the evening is given by Zoleka Heleski in a heavily accented patois, the determination if that’s a wise choice becomes difficult to make. Nonetheless, Heleski’s deliberately paced walk, her downcast eyes – heck, her whole physical presence – speaks to the weight she carries of her disenfranchised family, her confined life options and her lowly position in the household.
Sadly, Julie (Hilda Cronje) becomes powerless: either she loves or hates John, and uses various tactics to change his mind, to try to kill him or to facilitate their departure from the farm and families. Or really from the oppression and ideals of the past – ghosts that linger in this production though they cannot be directly addressed. No longer is the show about power games, because Julie has none; this is not a woman with options.
Meanwhile, the insane energy and passion of Bongile Mantsai as John proves that exterior appearances (like the attractive set) and vital performances don’t always make for  a compelling night out. Committed though these actors are, the sense of what they are communicating isn’t clear or as urgent as they want the world to believe.
The climactic moment of the show feels rather like a retread of Shakespeare’s famous lovers and the brutal violence – suggested by the introduction of a large rifle – can hardly come as a shock after numerous slaps and shoves.
Now if only some of those slaps and shoves were reserved to wake up the audience too. The show is strong but not one that demands an ovation after a nap.
For another impression of the show, please check out Chad Dembski’s Montreal coverage from last week.
May 6 - 10
Posted by THE CHARLEBOIS POST at 6:44 PM