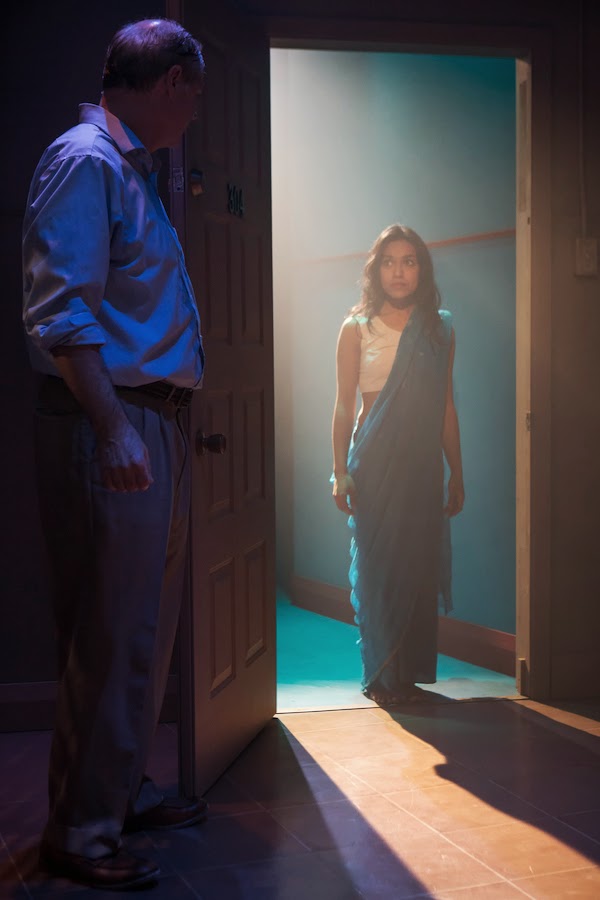 Guided Into The Dark
by Beat Rice

Directed by Andrea Donaldson, Soliciting Temptations explores the themes surrounding sex tourism and is very much a debate between the characters, Man and Girl. Man justifies the men who employ the services of young sex workers and the women who provide them should not be shamed. Girl argues that women are forced to do the bidding of men and the men who call on them are pigs. More in depth questions related to power struggles within gender, sex, prostitution, class, are discussed. We discover that Girl is not just some local who arrives at his hotel room for paid sex. She has her own motivations. There is so much that this play could ‘be about’. To me, it comes down to two people who are struggling with their own feelings of loneliness, desire, and self-induced guilt.

As a two-person play, with a lot of back and forth between the two, casting would be a challenge. Perfectly casted Derek Boyes played a dorky and endearing middle aged Western man who is clearly lonely and has issues with pride and shame. Miriam Fernandes plays a manipulative and feisty girl with her own mysterious agenda. Both actors look, sound and play their roles with total believability. In fact the entire production came across as very realistic. It is presented in real time, in text that is spoken in modern vernacular, in a room that looks like a plain, crummy hotel room in a developing country. It is clear when the shutters are open that we are in a developing country-because of the metal bars across the windows.

Ken Mackenzie has designed a very simple and ordinary set, accurately reflecting a low-end hotel room overlooking a busy smelly street. The stage is viewed on a corner, with seating on three sides, creating some challenging blocking scenarios. Donaldson has some awkward ‘bed blocking’ moments at the start of the play, but the text saves it.

Erin Shields has also written some very funny dialogue for both characters. As different as they are, they are sarcastic, dry, and quick to defend when attacked. By the end of the play we realize that both souls share an extreme vulnerability.