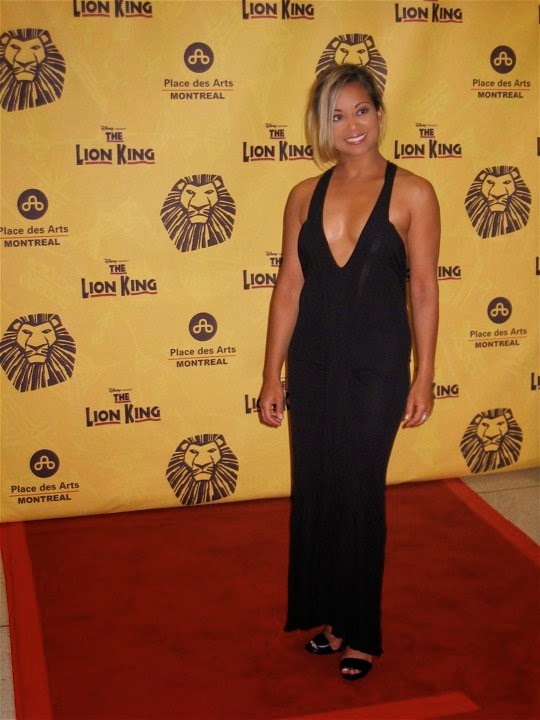 Theatre snobs think The Lion King musical represents everything that is wrong with theatre. But ask some of the 70 million people who have seen this musical on a stage in the farthest corners of the world, from Sao Paulo to Shanghai, and you’ll get a very different answer.

Or just ask my younger brother Skye, who was born the year the Disney movie was released, and grew up with the film – his favourite as a child. Skye had Lion King hoodies, toys, bed sheets, you name it, he could not get enough of The Lion King.

So when the musical made its Montreal debut in 2011, I brought Skye. I have always been Mufasa to his Simba, so during the production when Mufasa sang He Lives In You to his son Simba (their relationship in the very strong first act is the real heart and soul of The Lion King), I was quite overwhelmed.

That same night, Skye and I were also welcomed backstage by my old friend Kendra Moore, the renowned dancer who first dazzled audiences the world over with Les Ballets Jazz de Montreal, Ballet Austin and Hubbard Street Chicago, but left to join The Lion King (she was a member of the global and hugely successful The Lion King Cheetah tour from 2003–2008).

Today, Kendra is the tour’s dance captain, overseeing 11 female dancers. If one of the girls gets sick, has an injury, has a day off or goes on vacation, Moore knows each role inside out and can replace each of them with just a moment’s notice. “I’ve been fitted for my own costumes for every role,” Kendra told me when she was in Montreal.

Kendra will be back in Canada this spring and summer when The Lion King – all 18 semi-trailer trucks packed with sets and costumes – pitstops for an extended run at the Princess of Wales Theatre in Toronto from April 30 to June 15, then at Salle Wilfred-Pelletier at Montreal’s Place des Arts, from August 19 to Sept. 7.
“I’m on the road 52 weeks a year,” Edmonton-born but Chicago-based Kendra told me. “Having my own car actually makes travelling easier, although normally we have a company flight. Touring with The Lion King is like moving into a new apartment in every new city. I find my own place [paid for by the cast and crew’s company per diem for accommodations] and sign a short-term lease.” 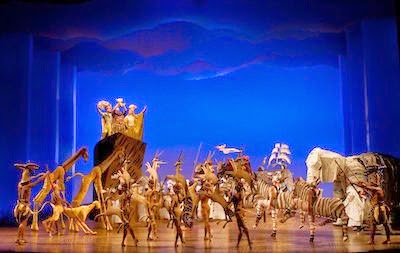 There are 110 people working on this Lion King show, including 48 cast members (actors, dancers, singers and puppeteers). Adapted from the 1994 Disney animated film, The Lion King has won numerous awards over the years, including eight Tony awards, notably for its 200 puppets.

If there is just one piece of advice I have for anybody going to see The Lion King, though, it is to get there on time. Otherwise you will not be seated until 10 minutes into the show. That’s because the showstopping opening sequence – yes, their showstopper opens the show – requires the cast to make their way to the stage through the audience in their incredible jungle-animal puppet costumes. 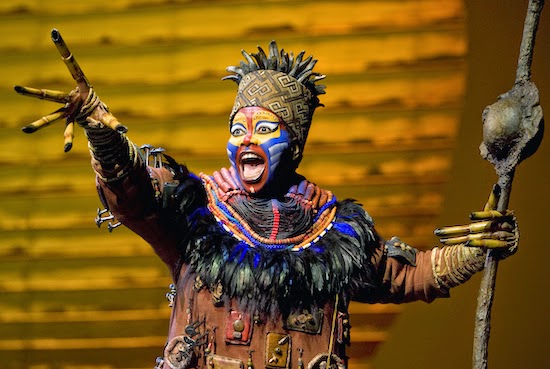 Later, when Kendra gave Skye and I a personal backstage tour, it quickly became evident that the choreography offstage – especially in the very tight dressing room “bunker” onstage behind the rear curtain – is as calculated as every step onstage. There literally is no room for error.

The last time The Lion King came to Montreal, it sold out 3,000 seats every night – plus two additional matinees every weekend – for four weeks. It will surely sell out again, so get your tickets early.

Meanwhile, Kendra is delighted to be coming back to Montreal, a city she loves like home. The last time Kendra was here she admitted, “The road can be lonely and demanding but it’s not impossible. And I’m lucky I’ve never been seriously injured.” Kendra smiles. “I’ve been doing it for so long because I just love being onstage. I still absolutely love performing in front of an audience. With this show, even if I’m offstage, I still get goosebumps watching the opening number.”

Mirvish Productions presents The Lion King at The Princess of Wales Theatre in Toronto from April 30 to June 15. Click here for more info and tickets.