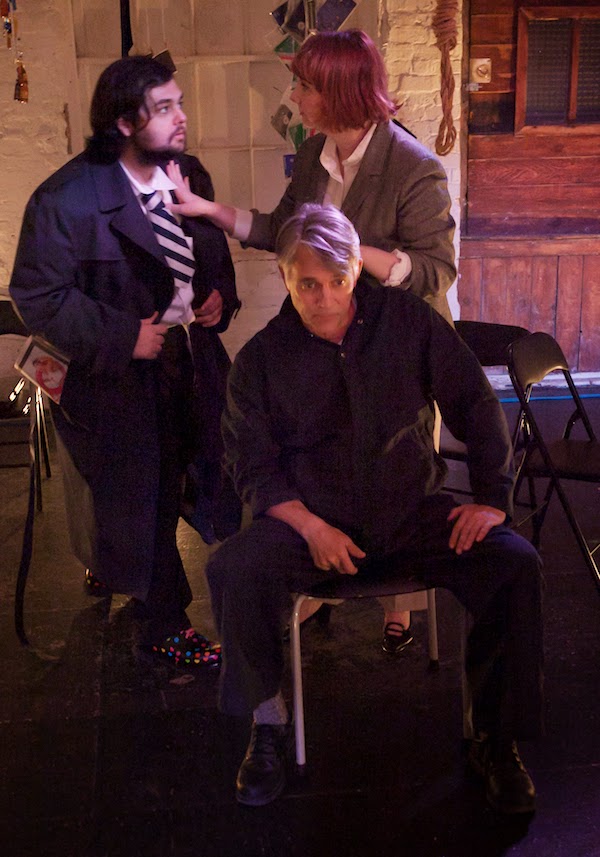 (photo by David A. Fitzpatrick)
Discomfort
by Winna Tse

An uncomfortable subject, an intimate setting and disjointed storylines make for a very chilling experience. Frozen, by Bryony Lavery is a horrific and personal story woven together by three individuals each connected in some way shape or form. Nancy (Lavetta Griffin) is the grief-stricken mother whose 10 year old goes missing and Ralph, (Peter Nelson) plays an integral part in her daughter’s disappearance. In the midst of it all is Agnetha (Lynn Zeelenberg), the American Academic who travels to England to research her thesis: “Serial Killing: A Forgiveable Act?”


At the beginning, I struggle to make sense of what the actors are talking about or alluding to as they blaze through their monologues. The acting is intense, forceful and altogether uneasy at times. In a small room, chairs are placed all around with actors and audience alike thrust onto the same stage with no fourth wall. This makes me even more uncomfortable as it forces a level of interaction which, I’ll admit, I am not used to.

The actors are quite strong in all their performances, delivering powerful monologues on a very unsettling subject matter whilst keeping the audience engaged. They make good use of the stage props which are strategically placed around the room. After the initial confusion, I start to warm up to the play and begin to understand just what the story is about and how the characters are connected.

Albeit horrific, Frozen is touching and thought-provoking. For those fascinated by the complexities of psychology, Frozen offers some interesting insights into the world of our brains and thought processes which for me was the most interesting part of this play. Produced by EN(LIVE)N Productions, Frozen is indeed a unique experience, perhaps not one I would like to repeat again but definitely one I will never forget.

April 5 - 20
[Ed: Christopher Douglas, producer for this production, is a senior contributor for CharPo]

Read also: designer Natalia Tcherniak's first-person piece about working on this production
Posted by THE CHARLEBOIS POST at 6:50 PM