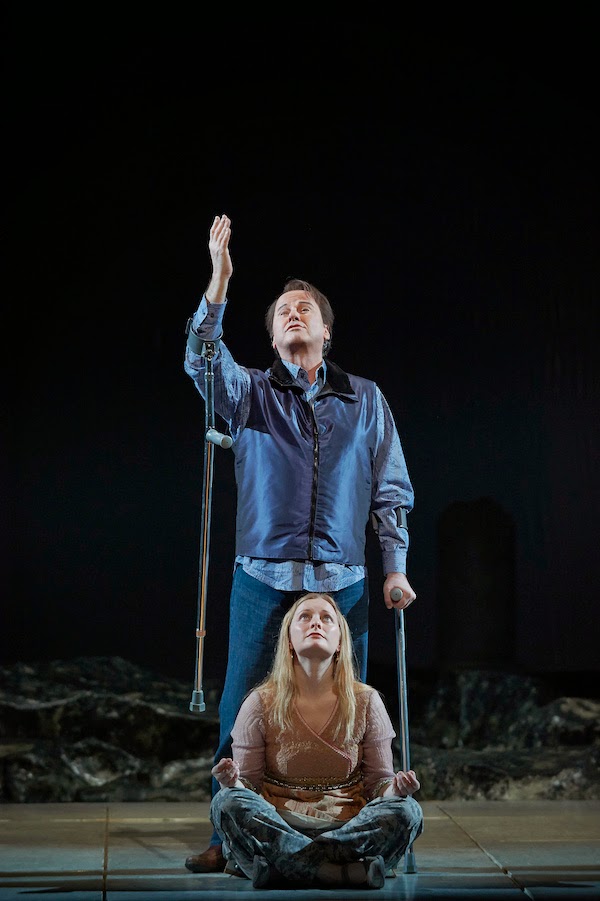 "When there is peace, the warlike man attacks himself."
Frederick Nietzsche

Peter Sellars has taken this idea and set it in the present day United States to present us with George Frederic Handel’s Hercules. Mr. Sellars is exposing a nerve regarding America’s troubled veterans which is made the more poignant because of another tragic shooting in Fort Hood, Texas where three soldiers were killed by a veteran suffering from post traumatic stress disorder this past week.

The story revolves around Hercules’, (Eric Owens), triumphant return to his wife Dejanira, (Alice Coote) with a captive princess Iole, (Lucy Crowe).  In most productions this is a simple love triangle.  However, Mr Sellars has deliberately twisted and transformed this love triangle and provided us with a fourth menacing element, the war, as an explanation of what is tearing apart this fearsome man, his loving wife, and the beautiful captive.


Mr  Sellars' twist requires the cast to act as well as perform a series of incredible arias and every one of them delivered. Mr Owens and Ms Crowe come to mind but it is because their anguish is more apparent and their frustration of not being able to communicate the horrors they witnessed is referred to at least once in every scene they are in either by Mr. Owens' frustrated silences, or Ms. Crowe's sudden tears and despair.  They have been to war as victor and conquered and they are now in peace and confused because of it.

The impact the war has on the family of Hercules takes time to fester and destroy their mental state. Observing that Hercules can sympathize with his captive princess Iole, his wife Dejanira becomes insane with jealousy. His son, Hyllus, played deftly by Richard Croft, becomes abusive to the same captive, Iole, despite his love for her. Suddenly two noble people are transformed into shadows of themselves and it is the war and its impact on people they adore that triggers this transformation.

This is a hard truth to accept when the glorification of war encompasses our every move and paying to look at it in your leisure time may not be what you would prefer. However, before you decide to forego this event there is the music to consider. The music is outstanding. I pity Handel’s anguished mind that paid such a heavy price to create such beautiful works. If Mr Sellars is jamming the truth of the horror that is war into us then Handel, as presented by Conductor Harry Bicket, is providing us with a soundscape that turns this into a pleasant event.

Handel’s libretto, largely borrowed from his Italian and French contemporaries, takes a line and repeats it over and over again. This means that the same phrase takes on a multitude of meanings brought forth through a variety of notes. As the program notes point out, at one point Mr Owens sings the same phrase with 50 different notes and ranges. Of all the performances there is a tragic aria by Ms Coote towards the end of the opera that stands out. For a good eight minutes she laments her choices and begs that the furies punish her falling in despair while singing an incredibly difficult musical phrase her voice never waivers and carries you through. She will break your heart.

In addition there is the lighting, a radiant event, brought to us by James F. Ingalls. Behind the stage is a series of curtains with different tints, and expressions that reflect the moods on stage. At one moment we are watching as Hyllus seduces Iole with observations of the celestial pieces. As the aria closes there is a slight amber glow like the shades of two inflamed lovers embracing their passion in the dead of night. The next scene starts with the same lighting but as a representative of the burning jealous fury of Dejanira; her hatred burns Hercules masculinity to a charred husk. The piece concludes with the steely silver resolve that indicates what Dejanira's now-chilled calculative mind has resolved to do.

Throughout the piece there are the details that bring us back to our own war-obsessed cultures. Costume Designer, Dunya Ramicova, provides us with US Army fatigues and women in headscarves. Set Designer George Tsypin places the triumph in the context of a beer guzzling festival and BBQ. The funeral is complete with a US flag-draped casket (it would probably have been more appropriate if it were Canadian).

This is an excellent thought provoking piece regarding the impact war can have on all the individuals who experience it both directly and indirectly. Unfortunately there are only six performances left until April 30th so get your ticket before this production is buried.

See also a first-person article by Joel Ivany about working with Peter Sellars
See also a video with Mr. Sellars explaining the concepts behind the original production of Hercules, in the United States
Posted by THE CHARLEBOIS POST at 7:19 PM